A Lot on His Shoulders; Joe Schroeder's Olympics

A Lot on His Shoulders; Joe Schroeder's Olympics 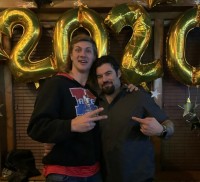 With the injury to Ben Pinkelman every USA forward on the Olympic 7s team will have to raise their game to compensate.

Some of the load will fall on the admittedly broad shoulder of Joe Schroeder. The powerful, long-striding Schroeder has slowly been getting more and more minutes with the USA team, and he brings an extra offensive dimension team. He is also an intriguing story.

Schroeder played high school rugby for Royal Irish in Indiana, helping the team to a national HS club championship in 2012.

"Joe is the oldest of three that played for me and they all played in the high school final," said current Royal Irish Head Coach Dave Snyder. "All amazing players. Joe is one of the best people I've ever met or coached."

Schroeder did not play rugby in college, instead taking a scholarship to be a cheerleader. That is, in itself, physically and mentally demanding, and he has said many times how much he enjoyed it. The result, thought, was that as he grew he emerged as an athlete with strong upper-body strength and excellent balance (female cheerleaders don't like it if the men holding them up can't hold them or fall over while they're doing it).

When Snyder mentioned a Royal Irish alumni 7s team would be playing one summer, "he jumped right in." And not long after he was on USA Coach Mike Friday's radar. He played in the Silicon Valley 7s in 2017 and after that started to work his way into the USA team more and more.  Friday was eager to get him on the Olympic team.

"Joe has been outstanding the last 18 months and continued to work hard day in day out to get better at all his weaknesses whilst excelling at his strengths," Friday told Goff Rugby Report. "He has physically gone to the next level to ensure he is a 14-minute man as well as ensuring for such a big man he is as agile as he can be laterally."

That's the physical side of it. What about the emotional?

In January of 2020, Joe Schroeder's younger brother Wil died. Another former Royal Irish rugby player who went on to play with the Indianapolis Impalas, Wil was a hugely popular player on Royal Irish. His death, at only 22, was a massive shock to his family, including his brother Joe.

"Wil was one of my more favorite players ever," said Snyder.

Friday saw his player deal with that loss. Joe decided to channel the emotion into a desire to have no regrets.

"His off-pitch tragedy that he had to deal with following the loss of his brother motivated and inspired him to seize the day," said Friday. The Joe Schroeder who came out of that loss was scarred, but also a man who had perspective. Has he been playing for his brother too? Maybe. Whatever the reason, Schroeder was a no-brainer pick for Tokyo.

"He's been able to keep grounded and be supportive to his teammates," said Friday. "We've seen Joe develop as a player and a person."

How to Watch the Olympic 7s>>