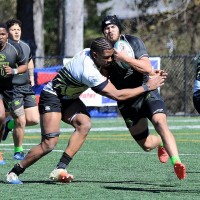 For the first time in 18 matches, Lindenwood University's men's team has defeated Life University in a 15-a-side rugby game.

After 17 straight losses to the Running Eagles dating back to 2013, the Lions exploded for a torrid second half to turn a tight one-point game into a bit of a runaway, eventually winning 45-27.

The teams traded points and the lead throughout the first half. Life opened the scoring with a length-of-the-field run from captain George Phelan. Lindenwood flyhalf Evan Williams replied with a penalty goal and Life answered with a kick from Tabonga Ngonyamo. But the relatively inexperienced Life team continued to get into penalty trouble, and that led to another penalty goal and then a try and a 13-10 Lindenwood lead. Fullback Connor Burns chased a box kick that was mishandled by Life and that allowed Burns to gather and score.

Last session before we head out! pic.twitter.com/mmUsXNLtKe

More penalties and it was 16-10 before Life charged down a clearance kick and Orrin Bizer dove onto the ball. Suddenly life was ahead 17-16. But Lindenwood replied superbly, putting Cael Hodgson through a gap and seeing him set up Burns for his second try. Just like that it was 21-17 Lindenwood at the break.

The second half saw Life put Lindenwood under some pressure and get a penalty goal from Ngonyamo, and with the score 21-20 it looked like we'd see yet another Lindenwood-Life knock-down, drag-out battle. But in fact what happened was that Lindenwood took control. Starved of possession in their opener with Arkansas State, the Lions showed they can win through a combination of patience when needed and urgency when the opportunity arises. Three tries and a penalty in the space of 20 minutes turns a nailbiter into a rout with Lindenwood taking a 45-20 lead. Life kept at it and scored at the end of the game, but that 20-minute period made it the Lions's day.

Despite being one of the very best rugby teams in the country, Lindenwood had never beaten Life in 15s until today. They had come close—very close at times—but never sealed the deal. With a very experienced side that had a game under its belt, they had as good a chance to win as at any time in their history, and with relentless defense, and pressure that forced Life to commit penalties, they took those chances.

Lindenwood is 2-0, both wins in Mid-South Conference play, and Life is now 0-1.

"It’s fun [to have beaten Life]; I am getting some notes from former players from all over the country and we had some here," said Lindenwood Head Coach Josh Macy. "We just played really well. The guys were on the same page. We scored three tries off first phase and that's a good indication the players understand what they're doing."

Flanker Ayden Hurst said he and other players who have been with Lindenwood for a few years were hoping to get off the Life schnide, but perhaps it was also a good thing that not every player felt that way.

"Honestly I am absolutely stoked we won," he said. "This is probably my last trip to Marrietta and to get the monkey off the back means a lot to us and also I think to the boys who came before us. But for the new boys, thinking 'oh, we've never beaten Life' wasn't an issue and I think that helped us focus."

Focus was the key aspect for Lindenwood when they broke the game open.

"We’re trying to convince the guys that it doesn’t matter who has the ball; it matters where we are on the field," said Macy. "We played in the right areas of the field and put them under pressure and that gave us scoring chances."

Chances they took, especially when the game was close.