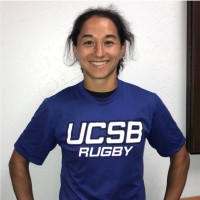 The UC Santa Barbara Gauchos women's team has announced that capped Eagle Kelly Griffin will be the team's new head coach for the 2019-2020 season.

Griffin replaces Zac Winter, who will be starting his career as an elementary school teacher this fall. The Gauchos program issued a public thank-you to Winter for leading the team to two straight national playoff appearances.

"Winter’s coaching led the team through an undefeated conference season, but the road to a National Championship ended with the team’s loss to Brigham Young University this Spring in the Final Four. The team would also like to thank the head coach of UCSB’s men’s rugby, Tim Lewis, for his contributions to the team’s success," said the statement.

Griffin captained the USA Women's National 7s Team in the 2016 Olympic Games and also played for the USA in the 2013 Rugby World Cup 7s. She was an All American at UCLA and a longstanding star for the Berkeley All Blues.

UCSB Women's Rugby had a good run last season, beating Chico State in the USA Rugby Women's D1 quarterfinals 45-24. Lauren Thunen scored 15 points in that game and center Naomi Carillo scored five tries. They fell 49-7 to BYU in the semis—Carillo and Thunen providing the only points.

But Carillo was named to the All Americans, and Thunen was picked for the USA 7s team for the Pan American Games in Lima, Peru. This year, UCSB Women's Rugby celebrated 20 years of the current program, and the addition of Griffin as a coach will also be an interesting start to a new era.