Jesuit NOLA and Woodlands Battle To A Tie

Jesuit NOLA and Woodlands Battle To A Tie 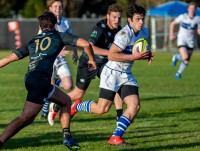 The Woodlands rugby club out of the Houston area took a trip to New Orleans and faced off with the New Orleans Jesuit Blue Jays.

This was first out-of-state test this season for both squads, and tested they were. The Woodlands took early control using the clever and accurate foot of flyhalf Mattox King, who continually found the Jays’ cover defense lacking with deep kicks into Jays’ territory. The Jays initially had no answer other than handling errors and inaccurate play. The Woodlands quickly capitalized when powerful No. 8 Tom Dixon barreled over the Jays’ trylineto establish an early 7-0 lead.

The next ten minutes of play saw much of the same, with the Woodlands applying constant pressure in the breakdown that left the Jays’ attack herky-jerkyat best. The Jays could not handle the pressure, and soon yielded another try, which increased the Woodland’s lead to 12-0.

King and Dixon remained at the center of The Woodlands attack. King is a good distributor of the ball and has an uncanny ability to find space. Dixon, a junior, has, like King, played varsity since he was a freshman. Moving from the front row to the back row, he's been a terror.

Jesuit eventually found the front-foot after unleashing a series of driving mauls that frustrated the visitor’s defense. A blistering run by senior Jack Beshfound space and meters. The Woodlands cover defense eventually tracked him down, but not before he offloaded to senior Johnny Tindall, who toppled several Woodland defenders on his way to the trylinefor the Jays’ first score. That made it 12-5.

The second half saw much the same, with the Jays now constantly pressuring the Woodlands, particularly in the lineout. Senior Cole Roy was a revelation at hooker; his throws were straight and true all match, which allowed the Jays to both maul and spin wide at will. Senior Langston Goldenberg used his extensive reach to stymie the Woodlands’ lineouts, stealing or disrupting nearly every throw. The Jesuit attack eventually saw senior Jack Besh dot down for Jesuit’s second try. Sophomore Mason Mafuezhit the conversion, to tie the game at 12-12.

The Jays continued to pressure the Woodlands and nearly scored a winning try in the final minutes but were denied by a handling error. The Woodlands, in turn, drove the length of the field on full-time and nearly scored, as a Woodland’s player dove across the trylineto touch down but was denied by a diving Jesuit defender, who punched the ball from his grasp just before he grounded the football.

The ball rolled into touch, and the referee blew the whistle to a 12-12 tie. Both teams locked arms after the match and walked, together, to the bleachers to cheer on the parents and fans who came to watch them.

"The season has just started for us and this years team comes with a lack of real experience at the high school level," said Woodlands coach Jack Rizzo. "As a result the opportunity to blood new players was the main goal of the entire weekend. It also gave us a chance to try different combinations of players and experiment with the make up of the team. The boys responded well and put a lot of heart into the NOLA match. Despite being inexperienced the club is engaged and are very quick to learn."

That showed on Sunday, when the Woodlands defeated a very physical Bayou Hurricanes side 24-7.