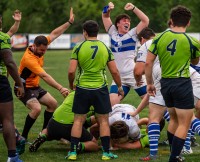 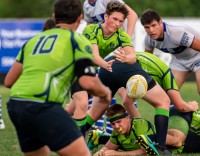 This past weekend, the Jesuit of New Orleans Blue Jay rugby team faced their longtime nemesis, the Bayou Hurricanes, in the Louisiana rugby state championship.

The match was played at the NOLA Gold stadium, immediately after the professional match between the NOLA Gold and the Utah Warriors. The Jays won the match, 19-7, and with it, their third-consecutive state championship.

The conditions on the afternoon looked spectacular: blue skies and relatively mild temperatures. But looks were deceiving, as the stadium was buffeted with a steady 20-MPH wind that made kicking and attacking out of the northern end nearly impossible. So even before the opening whistle, teams were faced with an important and perhaps game-changing choice: to play into the wind in the first half or the second. Jesuit won the toss and had to make the call, deciding whether to give Bayou a powerful opening advantage or open themselves up to a potential Hurricanes comeback in the second half.

Jesuit chose to give Bayou the wind and planned to survive the first half.

And that they did. Throughout the opening period, the Blue Jays played tight, conservative rugby, focusing their attack on ball retention as opposed to their typical wide-open attack. As a result, the Jays managed to maintain possession of the ball for the majority of the first half, and thereby deprived Bayou of the ability to take advantage of the wind. The Jays methodical play eventually drew a penalty against Bayou for not releasing the ball carrier. Will Newel kicked to touch and from the ensuing lineout, senior captain Langston Goldenberg caught hooker Cole Roy's throw and set up a maul.

After a series of phases, Goldenberg eventually scored on a pick-and-go. That was the only scoring of the first half. Jesuit led 5-0.

With the wind now at their backs, and with the Hurrcanes having lost two key starters to injury, the Blue Jays were expecting to dominate the second half. It didn't start that way. The Hurricanes took the opening kickoff and raced through and around the Jesuit defense to score and take a 7-5 lead. Fullback Jansen Folse was the one who blew apart the Jesuit defense, but he had precious little space after that.

Jesuit, having recovered from the momentary shock, settled into a more expansive game, and moved the ball from sideline to sideline. Powerful runs from the Jays forwards, including Roy, Will Motes, and David Childs kept Bayou on the back foot and forced Bayou to commit several penalties in a desperate effort to stop the Jesuit attack.

One such penalty gave the Jays another chance to attack from a lineout deep in Bayou territory. Having consistently mauled against Bayou all day, the Jays elected to run a play which saw Roy receive a camouflaged pass from Goldenberg around the back of the maul. As Roy thundered toward the tryline drawing Bayou players to him, he flicked the ball to senior Brayton Whittington, who was in support just behind him.

Whittington hit the linehard and punched in Jesuit's second try. Newel's conversion was good and gave Jesuit a 12-7 lead. Throughout the remainder of the afternoon, Jesuit smartly used the wind to its advantage, kicking out of its own zone to pin Bayou deep in its own territory. Senior Jacob Kieff shocked the crowd and his teammates when he thumped a kick that traveled 70 meters before rolling into touch ten meters from the Bayous tryline.

Later, senior flyhalf Will Newel matched Kieff with a clearing kick of his own that soared at least 65 meters. These kicks allowed the Jays to play just outside Bayou's tryzone for much of the half. This eventually paid dividends. Bayou, following Newel's kick, attempted to win their own lineout but overthrew the ball, which was quickly scooped up by an eager David Childs, who sprinted through and past several Bayou defenders for the Jays' third and final try. With Newel's conversion good, the Jays increased their lead to 19-7. The final whistle blew shortly thereafter, and with that, the Jays became the first three-peat state champion since the Blue Jay squads of 2005-2007.

Senior No. 8 Childs was awarded the most valuable player for his powerful runs and timely try. Roy, whose lineout throws were spectacular on the day, came in a close second.

The Jays take on Conshokocken rugby (Pennsylvania) in a challenge match on Wednesday, April 17, at 4:30, at the Marconi field in City Park. Bayou hold their heads high after a strong season that saw them fall just short in the final.