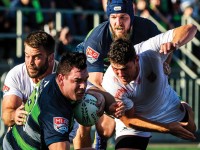 Major League Rugby is hosting a series of league games at the Las Vegas Ballpark baseball stadium in Nevada, and there will be a rugby invitational surrounding the event to attract rugby players and fans to a massive weekend of professional 15s.

The most significant rugby of the past decade has been played in Las Vegas, the Vegas Invitational and MLR Vegas Weekend are looking to keep this tradition alive

The MLR games will kick off on Sunday, Feb. 9 with newcomers the New England Free Jacks taking on last year’s semifinalists, Rugby United New York, in their inaugural MLR match. That’s just the appetizer, as on February 15 and 16 there will be four more games:

On February 16, the Toronto Arrows face the Houston SaberCats, and the San Diego Legion will play the Colorado Raptors.

All of these games will be at the newly-built, 10,000-seat Las Vegas Ballpark baseball stadium. The stadium features, among other amenities, a swimming pool in the center field stands—tickets are going fast.

“We know that Las Vegas and rugby go well together. We wanted to give our fans the opportunity to support their team on the road and take in a whole weekend of MLR action, all under the bright lights of Vegas. We can’t wait for February,” said MLR Commissioner Dean Howes.

Organizers Emersion Sports (www.emersionsports.com) will also host an invitational leading up to the February 15-16 games. The Las Vegas Invitational will host 7s and 15s teams at the Silver Bowl sports complex and the Nursery Fields east of the Las Vegas strip. The 15s teams will play challenge matches, and can even take advantage of the event to play conference and league games if that makes sense.

Much like the LVI in the past, there will be multiple 7s divisions for all levels of teams.

Teams that register to play and stay at the tournament hotel (the Westgate), will receive tickets to the MLR games—12 tickets per 7s team, and 18 tickets per 15s team.

Those attending the LVI will get to meet and chat with Major League Rugby players.

“This is a unique opportunity,” said Jon Hinkin of Emersion Sports. “To be able to play in Las Vegas and then watch the MLR teams is one thing. But when you meet these guys, many of whom just played in the Rugby World Cup, there’s that added connection. You can go home and stay a fan of the team, but know you’ve actually talked to them and talks about rugby with them.”

For more information and to buy tickets for the MLR Vegas Weekend, please go to www.ermersionsports.com.