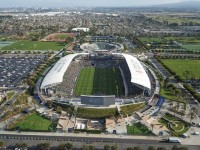 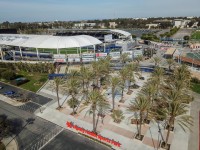 Now called Dignity Health Sports Park, the major stadium in Carson, CA has had several different names, and more than that has changed; if you haven’t been to an event in Carson recently, you might have missed millions of dollars in upgrades that have turned DHSP into a top-of-the-line sports venue.

Soon to be the host venue for the Los Angeles Sevens February 29-March 1, Dignity Health Sports Park has benefited from the success of the LA Galaxy MLR team, the arrive of the Chargers NFL franchise (while they await the building of their new stadium), the ownership of AEG, and the need to ensure area venues are in top shape for the 2028 Olympics.

All of that has led to many millions of dollars in major renovations and upgrades to the stadium—so much changed that anyone who hasn’t been there in the last couple of years would not recognize it now. The upgrades include a new 20-by-52-foot video board on the south side of the stadium, new LED ribbon boards, 3,200 tip-up seats replacing bleacher rows, and upgrades to about 1,500 midfield club seats and the stadium’s 43 suites.

The suites and hospitality areas have been upgraded to NFL-quality. The fan experience in the walkways and seating has been massively improved. The stadium has a large variety of interesting bars and food vendors with different cuisines.

The sightlines and seat quality are very good throughout the venue, and the premium seats—Captains VIP Lounge, Suites, and the 100 Club—are all much closer to the action than in most stadiums because the venue itself is a little smaller, with a capacity of 27,000, and they are all priced lower than similar hospitality areas in Las Vegas.

That smaller size, along with the much-needed shading over the shading roof covering the stands, makes for an intense atmosphere for the fans and the players.

Easy To Get To

While Dignity Health Sports Park is not in downtown LA, neither was Sam Boyd Stadium in the Las Vegas strip. One of the drawbacks to the USA 7s in Las Vegas was how long a drive it was to the venue from most of the hotels.

For the LA Sevens, the hotels in Redondo Beach and Manhattan Beach are just 15 to 20 minutes away, and the airport is about the same. The sheer size of Greater Los Angeles means fans have a wide variety of hotel options.

The venue will have space for a fan fest as well as plenty of space for parking and specific accommodations for rideshare service dropoff and pickup.

In the last two years Dignity Health Sports Park has completely changed. A massive influx of cash pushed by a new NFL franchise and a future Olympic Games has made the venue the perfect spot for the LA Sevens tournament Feb 29-March 1.

Organizers say you need to move fast to get your tickets. Go to: https://lasevensrugby.com/ to buy tickets.