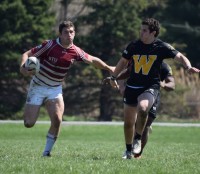 USA Men's 15s Head Coach Gary Gold has confirmed changes for USA's against England on July 4 and Ireland on July 10.

Both matches will be streamed LIVE on florugby.com in the USA.

With AJ MacGinty out injured, Bryce Campbell has been named captain. Campbell made his debut for the USA in 2016 against Romania and has since made 32 test appearances for the United States. Most recently, the 2017 Rudy Scholz Award-winner from Indiana University played in Rugby World Cup 2019, scoring the Eagles lone try against England in the opening match. Campbell played his high school rugby for Royal Irish in Indiana.

Titi Lamositele, Connor Mooneyham, and Chance Wenglewski are also out, so Christian Dyer, Matt Harmon, Dino Waldren, and Calvin Whiting will join the squad. Saint Mary's grad Waldren is a veteran with the squad while Dyer (Cal), Harmon (Life) and Whiting (BYU) are all exciting prospects who have an opportunity to shine as the new cycle officially begins.

Dyer recently competed with the USA Men at Quest for Gold Sevens as part of his contention for the Tokyo Olympics.

The 30-player squad assembles today in London ahead of its match on Sunday with No. 3 world-ranked England. Ireland currently sit at No. 4 in the world giving the United States men a huge challenge over the coming weeks.

A final qualification series against a team from South America will follow suit in October, ahead of the USA’s next battle with Ireland on Halloween weekend.

“After months of planning, we’re looking forward to finally getting back together as a squad," said Gold. "Losing AJ, Titi, Conner and Chance is disappointing but we have no doubt the other guys will rise to the challenge of the hugely difficult battles we have in front of us. Bryce has certainly earned his role as captain for this tour and has made considerable strides as a person and a player through his career. We’re excited to hit the ground running and maximize every opportunity we have in the short buildup to Rugby World Cup 2023 in France.”

Of note also in this squad is David Ainu'u, who has been a key part of Toulouse as the French club logged the French Top-14 and European Cup double. He's still only 21.