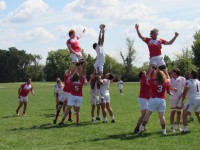 OSU, not favored in this game, gave as good as they got and were enormously effective in the set piece as well as stretching the IU defense on multiple occasions. But a late surge by IU overcame a deficit that was, at one point, 12 points, to see the Hoosiers through 33-31.

Indiana opened the scoring after executing a well-taken 50-22, kicking the ball from their own half and seeing it roll into touch in the Ohio State 22 area. As per the new law variation, this resulted in an Indiana throw-in.

Unfortunately for the Hoosiers, their starting hooker, Gabe Yeoman, went down injured at that moment and had to be replaced. Sub hooker Jacob Fidler, who didn’t expect to play a large chunk of the game, ended up playing 78 minutes.

Indiana was unable to secure that lineout, but their defense produced a turnover and the ball was spun out quickly to outside center Peyton Wall, and the Indiana native and Life University transfer raced in for the opening try and a 7-0 lead.

Ohio State replied almost instantly with a superb break by wing Hunter Simons; he was supported by fullback Christian Olney, who scored to make it 7-5 Indiana.

Back came Indiana, punishing a series of penalties by Ohio State. Another lineout loss was mitigated by a massive tackle that turned the ball over to Indiana, and Sam Story cut through to dive in under the posts. Indiana led 14-5.

But Indiana’s desire to vary their game and sometimes use the boot was thwarted somewhat by lineout troubles,, and with a strong scrum and the ability to disrupt IU’s lineout, the Buckeyes started to gain control.

Some good work from the forwards set up a chance for scrumhalf Vince Carson, and he scampered over. Ohio State missed a penalty goal attempt that might have put them ahead, but soon thereafter a nice break from flanker Nick Zolikoff set up a chance for prop Joey Phipps and he bulled over to give Ohio State a 19-14.

Indiana got all the way down to the Ohio State goalline as the first half drew to a close, but were just a little too impatient and were penalized. The teams changed ends with Ohio State up 19-14.

In the second half Ohio State came on determined to exert their scrum dominance.

A messy scrum resulted in OSU #9 Carso stealing the ball and racing down the sideline for about 70 meters. Carso used to be a wing and certainly showed a wing’s pace on that one. The conversion went in off the crossbar and it was a 12-point game at 26-14.

Indiana, now convinced they shouldn’t kick, kept trying to run out of their own end. It was tough going, but eventually flanker Don Hughes broke through and after the forwards consolidated, and Ohio State was offside, No. 8 Russell Lemaster got to pass off a tap penalty move and blasted over. 26-21 Ohio State with Michael Nettleton’s third conversion.

Ohio State replied almost immediately, punishing a penalty by taking the lineout and mauling over. Now the Buckeyes led by 10 at 31-21.

But the final 15 minutes belonged to Indiana. The forwards surged close to the line and then prop Eric Larson picked up and dove over. He needed two teammates to pick him up against but he’s done the job to make it 31-28.

Ohio State's restart was not ten meters, and that played into Indiana's hands.

With time winding down Indiana repeatedly got into scoring position, but Nettleton’s penalty attempts were just wide. Finally, after a series of lineouts in the OSU half, IU went for a short through to prop Andy Guhl and he drove on with his pack—Brett Krenke getting the try to put Indiana in the lead 33-31.

And that’s how it ended. Ohio State, not expected to win, almost did. Indiana, expected to be able to run roughshod, sometimes could, but were also stymied repeatedly by a tough Buckeye D.

Neither team came away thinking they had played their best or most disciplined game, but they had been entertaining, and these two may well meet again.

Notes: Indiana is now being coached by interim Head Coach Eddie Abel, who has been a long servant to the game in the Hoosier State. There’s no word on whether Abel will take the reins long-term, but he might. Former Coach Justin Goonan is reportedly moving on to another opportunity.

Indiana club president and fullback Will Chevalier was hugely influential in this game in getting the team go-forward in their own half. Indiana’s bench, including LeMaster, Larson, Krenke, and Fidler, was key, while Carso had a big day for Ohio State.