HS All Americans Enjoying Assembly In BC

HS All Americans Enjoying Assembly In BC 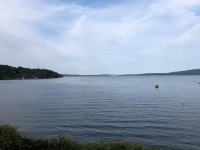 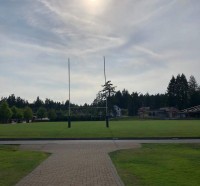 The Boys HS All Americans are cooling off in the chilly waters around Vancouver Island—think the world’s most Orca-dense ice bath—after two solid outings in the team’s assembly in Canada.

Head coach Brendan Keane and his staff have assembled 29 players to training in British Columbia. Several days’ work was followed by residency at Brentwood College prep school, whey they and their Canadian counterparts stayed in dorm houses just 20 yards from the rugby field.

The dorms allowed the players to relax, stay in close proximity, and socialize in a way that’s difficult at a hotel. As a result, they bonded quickly and got to work on developing their rugby. (See photos including the walk from the front door and the back door.)

“It’s been really good,” said Keane. “There’s not much that’ll get them in trouble here, unless they go to the MacDonald’s in town. We’re come into this with the idea that’s we’re developing players, give them some systems and structure, but also allow them the freedom to express themselves and do what they do well as individuals.”

It has worked nicely. The American players have found out that their teammates have unique skills that deserve to be noticed.

“We’ve seen some really good interplay between forwards and backs, and we’ve seen the team do well with different lineups,” said Keane.

So having a big, powerful front row or a smaller, more mobile one doesn’t seem to matter, the players adjust.

So in two warmup games so far, the USA kids have beaten their Canadian counterparts 24-7 and 27-7. The games were physical, if a little error-strewn, and the Americans capitalized on mistakes much more successfully than the hosts.

And these two very similar scores happened despite completely different lineups. Keane has started every single play, with only one player out of the 29 getting to start twice. Who? Nick Hardrict, the multi-talented Penn HS wing/fullback.

“It’s a testament to the coaches and the guys that they were able to put up two very similar scores even though we changed the entire team,” Keane said.

Next up, Sunday evening at 5PM Pacific Time is the final game, and that's expected to be sort of the actual test match between the HS All Americans and Canada U18s.