Guerra, Other Eagle Newbies Ready to Make Their Mark

Guerra, Other Eagle Newbies Ready to Make Their Mark 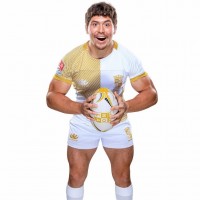 Maybe in a sense everyone in assembly with the USA National Team is a newbie, seeing as the 15s Eagles haven’t come together since thy played their final game of the Rugby World Cup in Mid-October 2019.

Now here we are, more than 20 months later, back talking about international test matches. For some players, such as Andrew Guerra, though, this is a new experience. One of 11 uncapped players in England preparing to meet the RWC runners-up on July 4, Guerra and his newbie cohorts are getting a crash course in the life of an international player.

“Always as an American rugby player your ultimate goal is to play for the USA,” said Guerra, who got his start with Mt. Carmel HS in Illinois and went on to become an All American at Notre Dame College. “But I didn’t want to rush it. This year I was just taking it week by week, knowing that if you perform well in those games you’re going to get recognized.”

The difference for the likes of Guerra compared to new Eagle hopefuls of, say, five years ago, is that he’s had Major League Rugby to bridge the gap. The jump from domestic professional rugby to playing England is imposing enough—from club rugby, even elite club rugby, or the college game the leap is exponentially more massive.

“I think what has helped me, especially this year, is that I was lucky to have some older guys like Cam [Dolan] and Dino [Waldren] to help me,” said Guerra, who now plays with NOLA Gold in the MLR. “I understood my role. You can fall into bad habits when you think you have to do everything yourself. Having veterans to guide me helped. They said, ‘just worry about this, just worry about your role.’ I can be more controlled, so I think coming into camp with the National Team was not a difficult adjustment.”

Guerra is a loose forward who puts his stamp on the game with his work rate.

“I pride myself on my defense, on making the most tackles, and trying to get some steals,” he said. “I will be hitting rucks, getting good cleanouts.”

He knows as a new player it’s tough to break into the starting lineup, but, like the other newer players, he’s determine to make an impression.

“It’s been an awesome experience so far,” he said. “You bring the team together and you’ve got guys competing for spots, but that’s a good thing. Iron sharpens iron, and when guys are pushing each other it makes the team better. I know a bunch of the guys from MLR and it’s cool to meet everyone now we’re on the same team.”

The Eagles arrived in the UK on Monday and that day was an acclimation day. Jet lag has to be defeated and basically you do that by getting into the local day-night pattern as quickly as possible. On Tuesday the players, who had already been on numerous Zoom calls going over vocabulary and various other aspects of play, ran a walk-through. Wednesday begins an intense period of three days of training, before Saturday’s Captain’s Run and Sunday’s test match.

“Definitely we’ve got two huge games against two of the top-five teams in the World,” said Guerra. “But this is what it’s going to take to get the USA to grow and get better. It’s a challenge that we want to take on.”