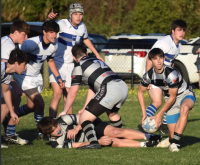 Germantown toured Louisiana this past weekend and came away with a win and a tie for their 1sts and a close loss for their 2nds.

For the 1st 15 this was a very good showing. Against #6-ranked school team Jesuit Germantown fell behind 24-7 in the first half. The quick, electric Jesuit NOLA backs hurt Germantown in open play. But the Germantown size started to tell in the second half, with the maul working nicely and their forwards smart enough to peel off and work the pick-and-go game after the maul was stopped.

Pressured as such Jesuit got into penalty trouble.

"Our attack stalled based on a series of penalties," said Jesuit Head Coach Adam Massey. "All credit to Germantown, though. They hung tough and clawed their way back. The mauled effectively off the lineout. They play to their strengths—which is their overwhelming size. They also poach well, and they put us under pressure in the scrum. First time all season anyone has."

For Jesuit Nate Williams scored two tries and ran hard all day; he also blocked a conversion kick that preserved the tie. Nick Ferina also played well for Jesuit but left early due to an injury. Christian Jackson was a force on defense.

For Germantown, No. 8 Ian Bullock won man of the match in both the Jesuit and Brother Martin matches. Formerly inside center for Germantown, Bullock was moved to No. 8 last season and has continued to be a huge offensive threat. He didn't leave a gap in the midfield, either, as inside center Brady Weatherly has been a defensive wrecking ball and his tackles show good technique and plenty of power. Senior prop Cooper Lomax has carried the workload in the forwards while junior scrumhalf Caleb Schmidt is a smart leader and keeps the attack moving.