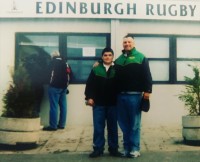 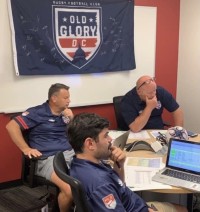 Having joined Trine University as the men’s rugby coach of a team that hasn’t been assembled yet, Danny Breda is hard at work building a squad, building a game plan, and doing it all at a school that has a rugby Olympian as an alumnus, but no actual rugby team.

Trine announced it was starting rugby in August and began a search for a head coach. They found one, in David Lyme, but in the end something rugby people are all too familiar with, foreign worker paperwork issues, scuttled that hiring. Breda had been a candidate, too, but earlier in the fall Breda had decided to back away from the opportunity for several reasons, not least of which was he wanted to be with his dying father.

A relatively young coach, Breda played rugby at Arkansas State from 2011-2016, and while he was part of a 7s national championship team, he also knew what it was like to go through four head coaches in five years. That experience, in a way, was in direct contrast to Breda’s experience with his dad, Tony. Tony Breda, after all, was always there.

A constant in his son’s life, Tony was “the Rugby Dad, in capitals,” said the younger Breda. “He loves the game. He toured with us when I was with the West Carroll Marauders. He just embraced the sport.”

If there was anyone who mirrored that mentoring experience for Breda it would be Curt Huckaby, the soft spoken judge who started the Arkansas State rugby program, was beloved by everyone who knew him, and who died in 2016. Those influences pushed Breda quickly into coaching.

He was a coach at Mount St. Mary’s when they started to make waves in NSCRO and then moved up to DIAA rugby. He worked with Gonzaga HS, and the last few years has been the coach at Loyola Blakefield, a varsity HS program in Maryland that won the state’s Interscholastic Athletic Association title in 2021. He also worked with Old Glory's academy program and assisted the MLR team plan out their draft.

Not quite 29, Breda has a pretty solid coaching resume, and loved the idea of building something from scratch, something that carried the influences of Tony and Curt as he created his culture. But instead he turned the job down and stayed with his dad as his father’s long illness took over.

Then the call came again. Hey, can you reconsider? Tony looked at Danny and said: “Go.”

“He said I had to take the opportunity, so I did.”

The opportunity meant moving to Angola, Ind. from Maryland. It meant, ultimately, not being at his father’s side when his father died. But life, said dad, goes on. Take the job, make it yours.

So now for Danny Breda the task is to put together a team with an idea that this is a long-haul process that requires patience, but, with his late start and no rugby team at all to form the basis, has a bit of a tight deadline. There are athletes and potential rugby players on campus already—remember that current USA 7s team start Joe Schroeder went to Trine after playing his high school rugby at Royal Irish. But he is also hard at work recruiting.

“The message I give to players is that we’re going to be building something together,” Breda told Goff Rugby Report. “I am here for the long haul. I want to put roots down in Angola and create something here at Trine. We’re a small college that acts like a big school, especially in sports. It’s an excellent engineering school that has a really great campus environment. And we’re in the middle of a hotbed area of high school rugby in the Midwest.”

Going to study and play rugby at Trine isn’t for everyone, said Breda, who has used the Next Phase Rugby app to find players who might want to meet the challenge.

“Some players want to go with a college that has an established team and I get that, but if you want to build something and help create something special, then Trine could be right for you,” the coach explained.

Meanwhile, Schroeder keeps an eye on the development of a program he's worked hard to support. Having an Olympian in your corner doesn't hurt.

"I’m excited for Danny to take on the role," Schroeder told GRR. "And I look forward to seeing him build the program. It’ll be a tall task but I know he’s up for the challenge. I’m going to do my best to support where I can."

Right now Breda is putting together a squad with the goal of entering NCR’s DII in 15s in the fall. And as he finds those players, he is focusing on creating a team he's happy with not only on the field, but off the field as well.

“I’m going to take Old Huck’s approach and build this team the right way,” said Breda, referring to Curt Huckaby’s influence. “We want players who fit in with the culture, that feel right. What we’re doing is about rugby goals, but it’s also about personal growth and building a legacy.”

And putting down roots.

Curt would be proud; so would dad.

To learn more about Trine University Rugby, check them out on the Next Phase Rugby app, or see Coach Danny Breda's information here>>