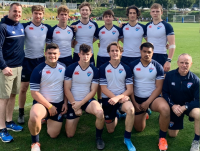 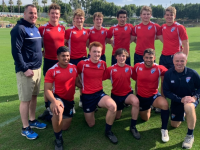 EIRA ran out two squads for the Boys Elite, a Red team and a Navy team. However, late injuries took a toll on the roster, and Head Coach Salty Thompson took 20 players to the tournament. More on that in a moment.

With the likes of Peyton Wall and Jake Broselle leading a relatively experienced team, EIRA Red went undefeated in pool play and made the semifinals. They were a little shorthanded, but played a strong team defense and forced teams to get out of their own 22. Most didn't.

Led by a bit of a breakout weekend from Ashton Liddell out of Tempe, and with Tom Dixon out of The Woodlands also a force, the EIRA Navy team was also unbeaten in pool play. Now here's where things get complicated. The EIRA Navy team was very shorthanded due to injuries before the tournament. So Head Coach Salty Thompson used a couple of Red bench players to sub in for Navy.

The Stars program's coaching staff objected, and argued that both EIRA Red and EIRA Navy should be kicked out of the tournament due to sharing players. It's worth noting that even in Sevens World Series tournaments, teams that fall below 10 players can use guest players from other teams. Regardless, the upshot was that EIRA Red remained in the semifinals, but EIRA Navy was dropped to the 9th-place consolation bracket.

Meanwhile, a team mostly from Maui, Hawaii, with a couple of players from Indiana, were very impressive and won their pool and moved on to take on Rhino Rugby Academy in the semis. Rhino won in overtime in a result that puts Rhino Rugby Academy in some exalted company going forward when we look ahead to the NAHS 7s.

In the other semi, EIRA Red stifled the Stars, who were hardly able to get out of their own 22. EIRA's kicking, defense, and teamwork were superb, and they controlled the game 34-0.

EIRA Navy went on to win the consolation bracket and in fact ended up 5-0 but finished 9th.

EIRA Red went on to beat Rhino 17-14 in the final and put the program in good stead for the NAHS 7s season ahead, with the Tropical 7s in April and the NAI 7s in August. EIRA scored one try tans to an impressive individual effort, one from nice ball-handling off a lineout, and another thanks to defensive pressure Rhino kept it close, but their second try was scored at the end of the game, so they didn't have enough time to finish the comeback.

See Video of the Final Here>>

EIRA made it a clean sweep with a victory in the Boys U16s bracket. Under Head Coach John Banarhall, the U16s just clicked nicely.

"They just came together really well as a team and immdiately embraced what we were trying to do. They are just good kids," said Banarhall.

EIRA Scores At The LAI: