East HS Comes Back To Beat Regis In Colorado

East HS Comes Back To Beat Regis In Colorado 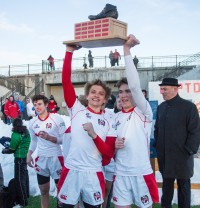 East HS opened up its Rugby Colorado account with a well-taken 26-21 over Regis Jesuit in a repeat of last year's final.

This was the first 2019 league match for both teams and was also the 14th annual Boot Bowl, played for a trophy made out of East Head Coach Bill Baer's actual rugby boot. Yes, really.

The first quarter of the match was back and forth with both teams testing each other out, but Regis did come close when a nifty grubber eluded the East cover. But East held on.

Later on, East had a two-on-one in the Regis 22, but the last pass hit the ground.

Finally, Regis wing Izzy Rodriguez scored first at the 15-minute mark after a slick inside pass from No. 8 Connor Blue. The try was converted by Gordy McKeehan and was just reward for the hard work Rodriguez put in during the game. East pressured Regis from the restart, and five minutes later inside center Isiah Rademacher scored make it 7-5 Regis. That's how the first half ended.

Just a few minutes into the second half Regis extended its lead. After a break by outside center Charlie Quinn, Regis scrumhalf Sam Sica darted through the disorganized East defense to score. McKeehan converted to make it 14-5. Again East would apply pressure after the try, including a charge down in-goal, and eventually East's fullback Jack Rochio scored about eight minutes into the second half. Liam Peck converted to make it 14-12. Three minutes later, East took the lead. Tighthead prop Trevor Barrios broke the line and passed to replacement Grant Carey, who ran in untouched. Peck again converted the try and East was up 19-14.

East gave away possession on the following restart and Regis mounted a sustained attack but eventually turned the ball over. East flanker Angus Skinner found space down the right side and after a few phases outside center Charlie Bennett scored in the opposite corner. Peck converted and East led 26-14.

Following another turnover by East on the restart, McKeehan countered and offloaded brilliantly to Quinn, who scored in the corner. McKeehan converted the kick from the touchline, putting his side within five at 26-21.

Regis had one last chance on attack, but a few errant passes sent the ball into touch ending the match.

"I am impressed by this team's determination and ability to focus in getting the come from behind victory," said East coach Bill Baer. "As the first match of the season, there was some sloppy play but it is a good base to build from."

Both East and Regis play Bellarmine College Prep out of California next.