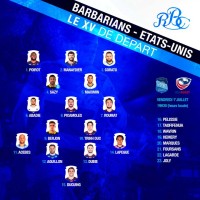 The USA Men’s Eagles have made their awaited return to camp this week in Houston, Texas as the team prepares for the beginning of the USA Rugby Summer Series presented by DAC.

Gary Gold’s squad will first take on the renowned French Barbarians under the lights of Aveva Stadium on Friday, July 1 at 7:30PM Central Time. This match marks the first ever trip to the United States for the French invitational side and an all-important preparatory game for the USA, as next week brings the beginning of a Rugby World Cup qualification series with Chile. Home to the Houston SaberCats of Major League Rugby, Aveva Stadium is expected to see a near sold out crowd with friends, family and fans for a unique battle of two hard-hitting teams. The USA vs French Barbarians will be streaming live on FloRugby.

The French Barbarians are an invitational side playing a notoriously creative style of rugby, where the flashy nature of play is expected to be a unique opening run-out for the USA.

Working off lessons from the last assembly against Uruguay, the Eagles will look to match the fast-paced performance on the pitch and reignite chemistry as a USA squad following a full season of club play around the world. Team captain AJ MacGinty will also rejoin the roster after missing the Uruguay fixtures in October. The Barbarians bring a mix of talent to Houston this week, with a number of notable veterans joining some young flash.

Louis Piquamoles and Francois Trinh Duc headline the visiting roster, both having played on the Rugby World Cup runner-up French squad in 2011. A few players will find themselves back on the pitch against the USA as well, with Jefferson Poirot – a member of the 2019 Rugby World Cup team that faced the USA in Japan – and Damien Chouly who first played the USA all the way back in 2010 for the Churchill Cup. With this blend of skill and experience from the Barbarians, the Men’s Eagles will run into a unique combination of play that should make for an exciting night of premier rugby.

“It has been a short, but productive camp in Houston thus far," said USA Head Coach Gary Gold. "It’s great to have the team back together and solely focused on these important next few weeks. I’m excited to see the energy is high amongst the boys, to once again be playing rugby with each other and chase the goal of qualification we missed out on last fall.

Despite the exhibition nature of this match, we know the Barbarians will bring fast play and tenacity to the pitch, we’re ready to match that as we get in the right mindset for this tour. Kicking off this summer and qualification series in the win column against some experienced French names is exactly what we expect as a group this Friday.”

See the French Barbarians lineup in the image above left.