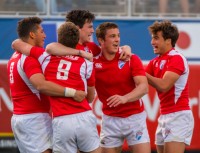 The select-side program will enter two teams into the U18 Boys 7s brackets, EIRA Red and EIRA Blue, and a U16 team, as well.

"We should be pretty strong," said Thompson. "We're excited about it. The venues look impressive and the chance to play and also see the international World Series tournament is something you just can't pass up."

The LA Invitational will run two days. The first day of competition will be February 28, when there are no LA 7s games (the LA 7s being the HSBC Men's Sevens World Series stop in the USA). Those games will be played at Orange County Great Park in Irvine.

Those excellent playing surfaces are convenient to many hotel areas and other activities for players and their fans.

The second day of the LA Invitational coincides with the first day of the LA 7s. Both will be played at the Dignity Health Sports Park complex in Carson, Calif. Players can play in the LAI, leave their kit at designated bag-drop areas, and walk to the stadium to watch the international stars.

All of the LA Invitational brackets will be at the same venue—nothing split off to another area. That means you can see a U18 boys game on one field next to an elite women's game on another, with a college game next door, as well.

Thompson said there's an appeal to that.

"That's something that's special about playing in Dubai is that all of these different tournaments are happening right at the same place and you're rubbing shoulders with some pretty famous rugby players," he said.

Thompson led the North American Lions at the Dubai 7s invitational and said the USA Eagles came to watch them play. And there's more.

"You're walking around the bump into a guy and it's [former South Africa 7s star] Cecil Afrika; that kind of stuff goes on all day long," he said. "Everybody's there at one site and that's how rugby should be, with that festival atmosphere."

The LA Invitational will have over two dozen brackets:

Online signup is available Here>>. For more info you can also email: Invitational@LASevensRugby.com.