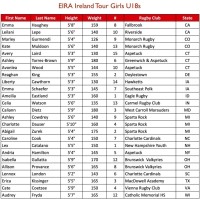 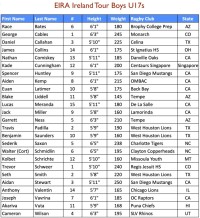 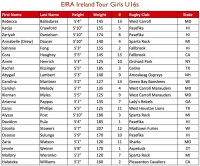 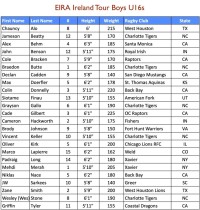 It's also a learning experience, culturally as well as with rugby.

The first games were losses for the EIRA Boys U16s and U18s, as well as the Girls U18s team, but they were competitive losses. The U18 Girls lost 26-25 and had their kicking been a little more accurate they'd have won that one. The U16 girls were very physical and defended well in a 14-5 win.  The U18 Boys lost 39-7 to the Ulster Clubs U18s, which is a pretty high-level group to face right off the plane.

GRR checked in with JW Sarkees from the Greer 76ers in South Carolina and Wes Stone of the Charlotte Tigers of the U16 boys.

As far as the game went, Stone said there were a lot of aspects of play where the EIRA team, despite being a bit younger, were stronger.

"Our scrum was really good," said Stone. "Even when we came together on 'set" we shoved them back. I think we were more physical and really I thought we were crushing defensively—so much so that they had to change up their offensive play for the second half."

"Even when they made the changes we defended really well," added Sarkees. "The two tries they got in the second half were just kind of long tries, one was an intercept."

The EIRA team led 7-5 at halftime before succumbing to Ulster 20-7. The key difference, said Sarkees, was Ulster's speed to the breakdown.

"When someone went to ground with the ball someone was right there almost immediately," said Sarkees. "So we know we need to be quicker to the breakdown."

The team itself is coming together nicely and they acclimated quickly to being in Ireland.

"Most of us have been playing in hot weather so it being 85 in Ireland wasn't a problems for us," said Stone, the 6-1 No. 8 from Charlotte. "We flew in, got off the plane and went right onto the field. The energy was really high and and we are coming together, I would say, surprisingly well. We're building a chemistry."

On trips like this athletes have to force their way through a time zone shift. It can be rough, especially when coaches tell you when you should sleep and when you should not sleep—anyone who knows teenagers knows how tough that can be. That, said Stone, was the toughest part.

Of course this is a development tour. The idea is to open up some horizons and get these players in a position to continue to perform at a high level. But the message can't be that they only get good coaching from the likes of EIRA. They do get good coaching from EIRA coaches, of course, but others got them there.

"I am playing with Greer now and it's been really great," said the 5-9 flyhalf Sarkees. "I have really enjoyed that and that's helped me take my play to the next level. now, going to the camp in Elkhart and now on tour I keep learning more.

"I played with the Charlotte Tigers for about seven years," added Stones. "They are the ones who gave me the skills and taught me the game. The coaching staff at the Tigers were amazing and got me started."

So next up, it's Connacht for the U16s. Stone is brimming with confidence.

"We're very excited," he said. "Our defense is dominant. We have some real monsters who run with the ball—Medhi [Merah], Chauncy [Alo], and Zane Smith—they're big guys who can run and hit hard and they can do the tip pass. We just need to put some things together around that."