D'montae Noble's Journey to the MLR

D'montae Noble's Journey to the MLR 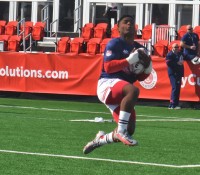 Old Glory DC lost a hard-fought match against New York in D’montae Noble’s fourth match of the 2021 MLR season, but for Noble it was a match of firsts.

Late in the first of half the match Noble scored his first try as a professional rugby player; we caught up with the rookie Old Glory wing to discuss how the former West End, Atlantis, and Kutztown star is adjusting.

Noble's road to Old Glory DC and the MLR began when he was 8 playing for the Warrenton Wolfpack.

“I started out with basketball and football," he said. In high school he would letter in both sports. "Robin Reid and Greg Hicks got me started [with rugby]. I was kind of forced to play it at first but when I tried it, I loved it.”

When he was a junior in high school Noble moved his playing career to West End SYC Rugby. His speed and growing understanding of the game saw Noble help West End to the Virginia state final, where they lost to Fort Hunt. However, Noble would help lead his club to win the Virginia title the following year, beating Fort Hunt in the final. His high school career also included a star turn at the Las Vegas Invitational for Atlantis, some High School All American camps, playing for the Virginia all-state team, and Paul Sheehy’s DMV United team. With DMV he was back at the LVI and again tearing it up.

After high school his path took him to Kutztown University where he would not only hone his 15s skills but his 7s as well.  While Kutztown would win the Rugby East with Noble playing fullback, the Bears were even better at 7s. Noble was selected as a 7s Collegiate All American in 2019 and was all set to even great heights in 2020 when the COVID shutdown happened.

The pandemic, though, would bring Noble to DC by an unexpected path. Omitted from the MLR Collegiate draft due to a communication error, Noble got a second chance when the Dallas Jackals decided to delay their entry into the league. As a result a supplemental draft was held to distribute the Dallas players and to allow those excluded from the initial collegiate draft to be picked up by the other 12 teams. Old Glory snapped up the young 5-8, 189-pound speedster.

He is not big by any stretch, but Noble is powerful and what he lacks in stature he makes up for in speed and determination. He is quick with the ball in hand, while at the same time not being afraid to go into the breakdown. Throughout his early rugby 15s years he was most often could be found at fullback, however with Old Glory he is on the wing.

Though Noble is willing to play anywhere he is asked, “you can put me in at prop and I will always do my best for the team; I’m never going to say no to my coach.”

And he has fit in nicely.

“I’m not gonna lie, I love this team. There is a lot grit. Any time you lose you’ve got to get back to the office and grind out,” Noble said after the tough loss to Toronto; the team’s third match of the 2021 season. “Coach Douglas does a great job of getting us ready for the next team.”

Noble is certainly working toward that and his first-half try against New York was selected as one of MLR’s Tries of the Week.

It's a long way from the Warrenton Wolfpack, althought really Warrenton is only about 50 miles from DC, so in one sense it's not that long a way after all. Still, we asked Noble what he'd say to his eight-year-old selse, or for any young kids starting on a rugby path.