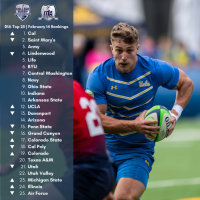 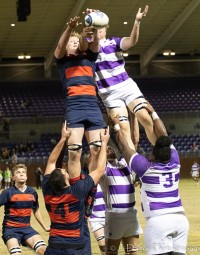 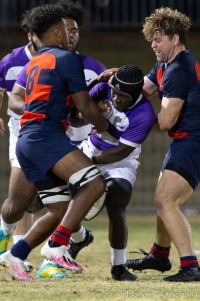 Saint Mary's took control of 1st place in the California Conference after a convincing 60-5 win over Grand Canyon Saturday night.

The Gaels were tested early by the 'Lopes, but the superb scrummaging and dangerous open field play of Saint Mary's were too much. With the win Saint Mary's is 3-0, with Grand Canyon dropping to 3-1. It is highly unlikely that Saint Mary's will drop any of their final three conference games.

The game also featured the McElligott brothers, Ronnie and Sean, facing off against each other with their parents in the stands—dad sporting a shirt that was half Saint Mary's and have GCU.

Cal Poly, meanwhile, unloaded on UC Davis 87-17. The Mustangs improve to 2-2 and have San Diego State and UC Santa Barbara remaining on the slate. As for Santa Barbara, they ran into a much-improved Santa Clara, which emerged 50-29 winners.

Both teams hadn't really played much, if at all, coming out of some restrictive COVID shutdowns, and it has taken some time to get their sea legs under them. For Santa Clara, starting against Cal Poly, Saint Mary's, and then Grand Canyon meant they really couldn't ease into the season.

But, said Head Coach Paul Keeler, they have been improving.

"Our scrums have improved a lot," he said. "There's only so much you can do on the sled. After a while you need to scrum against opposition, and our guys are still new to the game scrumming against other guys new to the game. I know the coaches at Saint Mary's said, and I feel the same way, that if we had been able to scrum better the game would have been a lot different."

A better scrum after some game experience helped set a better platform for the Broncos. Their defense is improving, too, as the players are not getting sucked into tackles as easily and therefore there are more players spread out to guard the space. Santa Clara lost captain and No. 8 Anton Viera early but rallied nicely. Scrumhalf Emanuel Lai has been very dynamic, and Daelan Denenberg's attacking flair from fullback is a key positive for Santa Clara.Outside center Ben Voelz also played a strong game.

Meanwhile Texas A&M has not only put itself in a strong position in the Red River, but clinched the conference.

The Aggies and Baylor had to wait to play until Sunday because cold weather (windy, rainy, unpleasant, and yes, colder than just Texas-cold) had closed the fields for Saturday. But on Sunday the Aggies pulled off a 40-21 victory to improve to 6-0. Even with two games left on the calendar for A&M and for 2nd-place Oklahoma, no one can catch A&M.

"It was a good day and good to finally win it after a couple of years of having it taken away from us," said A&M Head Coach James Lowrey. "We have a very underclassmen team and I am excited about all of these guys. To start four guys who are new to rugby and see them perform was really good."

The team has the hunger, Lowrey said.

Oklahoma beat Texas 21-8 behind a big day from center Joshua Dickens. In a tight first half it was the penalty goals from Dickens that kept OU in it, even as UT center Christopher Jordan scored to give his side a slim 8-6 lead before halftime. But right after the break OU scrumhalf Chaslyn Parker was over for a try to get his side back in front. Dickens added a third penalty goal, and then capped it off with a try that he converted.

Oklahoma had started the league season 0-3, but then their opener with Texas was converted to a forfeit win, and starting in December they found a little cohesion and were able to string together wins over North Texas, Baylor, and now the Longhorns to improve to 4-2. A win next week over North Texas could clinch second for the Sooners.

In Non-Conference games, Cal scored at the death to bea BYU in a very entertaining clash between longtime rivals. See more here>>. Central Washington looked very impressive in a 60-13 defeat of Arizona in Tucson.

"This is a great road win for us today, playing in front of a good crowd in the heat against a good Arizona side," CWU Head Coach Todd Thornley said. "The scoreline does not reflect how hard we had to work at times today, which I am very proud of the improvements we made after a disappointing performance last week."

"Our road forward only gets tougher, so we must use this momentum and continue to grow in all areas of our game, particularly our ability to stay disciplined defensively for long periods of play," Thornley said. "We look forward to being back at home next week where a massive challenge awaits us."

In the Mid-South Life edged Arkansas State 19-15 in a typically close Mid-South game.

ASU led early and it was a back-and-froth game throughout. A penalty try and a try from Francisco Sied put Life up 14-5, but a converted try and a penalty put ASU up 15-14 in the second half.

As full time crept closer, Sean Lenzsch sped in for the game-winner Life.

"The boys did a great job adapting to the environment," said Life captain Jared Miller. "It was cold and muddy but we really embraced it.  We had to change the way we normally play to pull out the win and that's exactly what we did."

Arkansas State got a close-loss bonus point, and Life improved to 3-1, but neither moved in the standings.

The PAC Rugby Conference had just the one game and UCLA ran away from Utah 57-3. For new Head Coach Harry Bennett it was a good showing after a frustrating loss to Saint Mary's the week before.

"It was pleasing to put a full 80-minute game together," Bennett told GRR. "Our attack is certainly coming together but I was more pleased that we held Utah to three points. For us to compete with the top programs we have to be able to hold them to low scores more consistently.

The back row, led by a man-of-the-match performance from Alex Cortessis, was exceptional for UCLA, which improves to 1-1.

UCLA plays Cal next week, and Cal also has Utah on the schedule on March 19. Utah and Arizona are set for April 2 to round out the conference schedule.