The Decade In College Rugby

The Decade In College Rugby

The first D1A final. Won by Cal over BYU, Dobson photos. Three future Eagles are in this photos-Saun Davies, Eric Fry, and Danny Barrett. (A fourth, Paul Lasike, is at the bottom of the ruck.)
01.01.2020 - Alex Goff 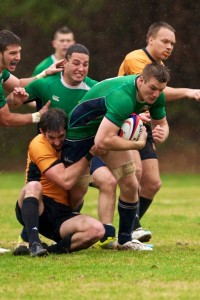 The 2010s was a tumultuous decade in college rugby, with the entire landscape changing during that time.

Back in 2009, this write put together an article for the old Rugby Magazine that noted the fact that BYU had emerged as a challenger to Cal as the top men's college team in the country. What eam, we asked, might be the next BYU? Among the teams we looked at was Saint Mary's, but we ended up settling on a program that didn't have a team yet—Life University.

We were right, of course, as both of those teams became champions. With the emergence of varsity programs around the country, we also looked at Lindenwood, Arkansas State, and the service academies.

The growth of top programs and programs that have strong financial support and administrative support is a major story of the decade, but it's not the only one.

NSCRO was just getting started. It was a vibrant organization by then, but didn't have an agreement with USA Rugby, and was still getting traction throughout the country.

BYU and Cal dominated the Men's D1 landscape, meeting in every national final from 2006 to 2010.

BYU's women's team didn't officially exist, as it was not a sanctioned club by the university. It is now a school-supported program.

There was no separation between D1A and D1AA in men's college play. There was D1 and there was D2.

There were no college 7s championships. When Rugby 7s became an Olympic sport in the fall of 2009, USA Rugby was very slow to react and it wasn't until 24 months later that USA Rugby held a collegiate 7s national championship. As a result, they ceded the high ground to United World Sports, which started a college 7s tournament, on TV, in June of 2010 and held another in 2011. The CRC would expand to include NSCRO and women and a high school tournament, and while it is no more because United World Sports is not really operating anymore (for various reasons), that tournament energized collegiate 7s, and beat USA Rugby to the punch.

The push for women's NCAA recognition was stagnant. Now there is an NCAA conference (NIRA), with three tiers of varsity teams. That championship is extremely competitive, and in the last three years we've seen three different champions—Quinnipiac, Dartmouth, and Harvard. In addition, several other programs are varsity from D1 (Central Washington, Davenport) to DII and NSCRO.

Only a handful of coaches were paid anything more than expenses to coach rugby at the collegiate level. Now, with varsity, almost-varsity, and major clubs supported by the school or by boosters, dozens are paid to coach.

There was no equivalent of the Heisman Trophy for college rugby. But thanks to a partnership between the Washington Athletic Club of Seattle and Goff Rugby Report, we now have on for women—the MA Sorensen Award— and one for men— the Rudy Scholz Award. Credit must also go to Rich Cortez and Tam Breckenridge at USA Rugby for how quickly they embraced the WAC Awards.

Of the first eight winners: Hope Rogers, Ilona Maher, McKenzie Hawkins, and Emily Henrich for the women, and Dylan Audsley, Bryce Campbell, Connor McNerney, and Harley Wheeler, seven have been capped in either 15s or 7s, and the eighth, McNerney, is an officer in the US Navy.

It all used to be more complicated. During the 2010s a bunch of colleges partnered with United World Sports to create the Varsity Cup, a four-round knockout postseason that coincided and competed with D1A. Benefiting from, but also dependent on, sponsorship support through UWS and a TV deal, the CRC lasted five years, with BYU winning three times and Cal twice. While it is no more, it demonstrates what can be done with some energy and unity of purpose.

College Rugby has now struck out on its own. The National Small College Rugby Organization basically handles its own affairs; the Collegiate Rugby Association of America (CRAA) has formed to operate D1A and quite possibly more than that (Women's D1 Elite?); NIRA is going strong. In other divisions teams have formed their own conferences and forged their own identifies. The ability for collegiate coaches and athletic directors to come together to run the college game is undeniable, and the freedom for them to do so is unmatched.

Men D1A Team of the Decade: Life University. From not existing to four D1A championships. We could have picked Saint Mary's here, too, or Cal, or BYU. It's a tough call, really, but because Life had to start its undergraduate program from whole cloth, we're going with the Running Eagles.

Men D1AA Team of the Decade: Dartmouth. Multiple CRC titles, and consistently among the best in that division.

NSCRO Women Team of the Decade: Wayne State College of Nebraska. That was easy. Six national championships in the 2010s.

Women DII Team of the Decade: Davenport. Moved up to D1 but was dominant in DII before then.

Men's 7s College Team of the Decade: Cal. The Bears won five straight CRCs and produced one of the most iconic America 7s players in Danny Barrett. Lindenwood is a close second.

Women's 7s College Team of the Decade: Lindenwood. In the first couple of years of the 2010s, Norwich seemed to have 7s figured out over other teams. But in the latter part of this decade, there's no doubt. Lindenwood has risen above the rest.