Day One in the Books for Falcon 7s

Day One in the Books for Falcon 7s

Some 7s teams learned a little bit about elite-level competition, and still others show how it can be done as the Falcon 7s capped off Day One in Little Rock, Ark.

Fallbrook HS showed excellent teamwork and picked up where they left off leading Southern California's Girls 7s league. Fallbrook beat South Panthers 2 and Northeast Academy comfortably, but had all soprts of problems with a very tenacious Rhuno Elite side. In the end, it was on a tap penalty where Fallbrook caught Rhino napping where the difference lay. Fallbrook scored and won 12-7.

In the Blue Pool, which featured five teams, the South Panthers ended up 0-4, but everyone else was right in the mix. ARPTC beat Summit in a dramatic 24-17 win in which Reagan King's 58-meter jaunt was the key play, turning a 12-10 game into a 19-10 lead for ARPTC. But Rhino 2 leverage power and the ability to work short passes to move the ball to go 3-1 as well.

Iowa was very effective, especially working it up the middle and challenging defenses to stop them before they offload, but ended up getting pipped by Rhino and ARPTC and going 2-2. Summit was also 2-2.

The senior bracket saw the ARPTC go 4-0. Summer Harris Jones was superb and torched several opponents for multiple tries. Spiff Sedrick, the 2020 MA Sorensen Award-winner, was also dangerous. Right behind them was the Northeast Academy, which decided not to pass the ball long distances, and instead ran quick, short passes and looped around the put extra bodies in space. Britni Ebert was a revelation for them.

So this is how Sunday shakes out: the top two from each HS pool play in the semis, with ARPTC facing Rhino Elite and Fallbrook taking on Rhino 2. The top four in the Women's Bracket also face off, with ARPTC USA Hawks (4-0) vs ARPTC Blue (1-3), and Northeast Academy (3-1) vs ARPTC White (2-2).

The rest of the HS bracket plays for the Bowl, with South Panthers 1, South Panthers 2, Northeast Academy, Summit, and Iowa Selects all playing two games in an abbreviated Round Robin. It will be an interesting series of clashes because several of these teams have shown flashes.

Meanwhile, the NCR All-Stars in the Women's Bracket, who went 0-4 on Day One, won't be left out. They will play both losers of the semifinals. 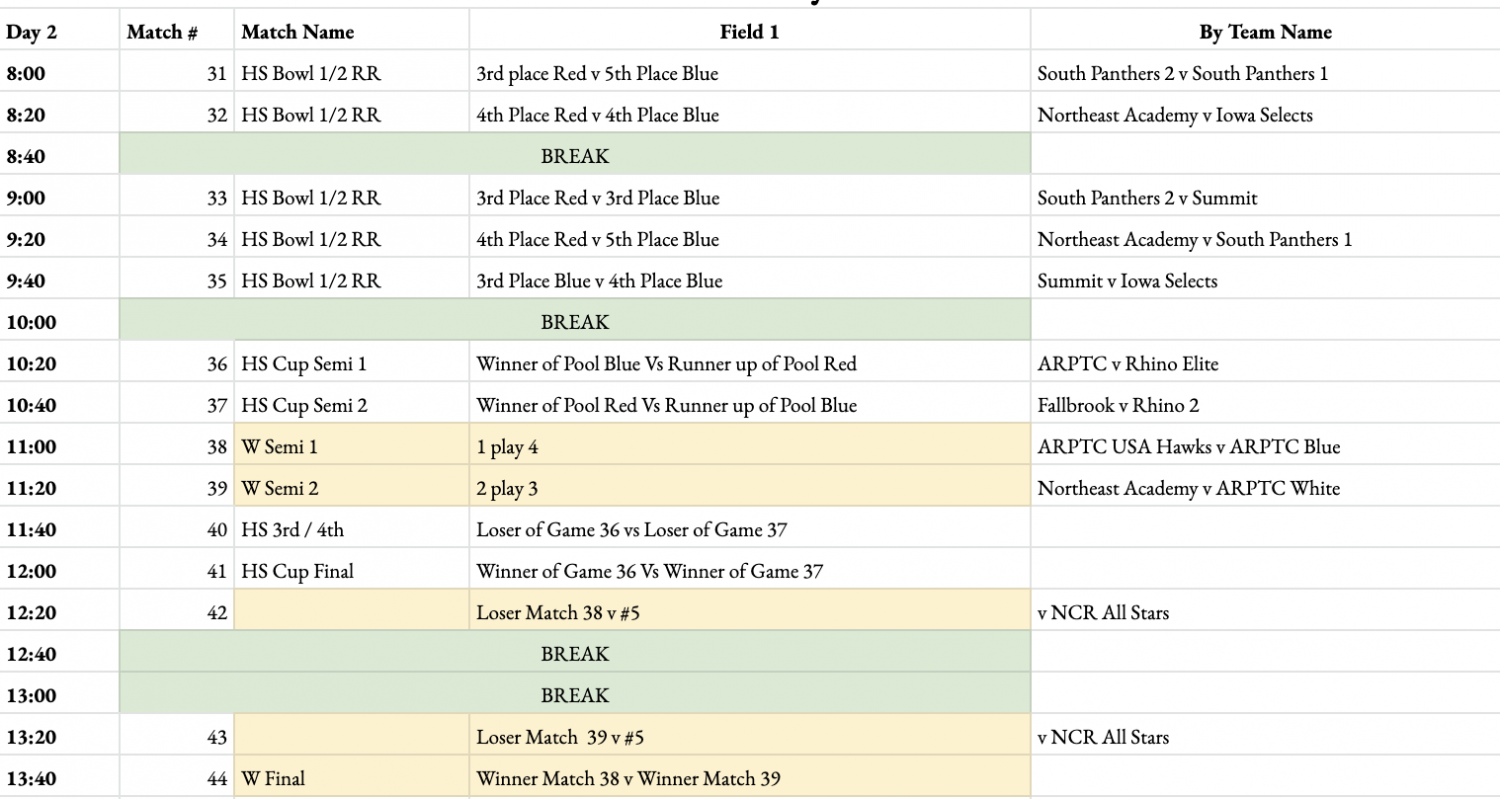