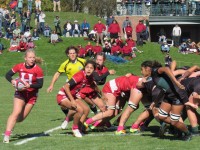 It was a runaway and then it wasn’t, but Dartmouth held off Harvard 45-31 in the clash of two undefeated NIRA teams, setting up a potentially thrillling clash in the final in a few weeks’ time.

Dartmouth dominated through the first 38 minutes and looked to run away with it. Controlling possession, shoving Harvard back in the scrums, and producing a nice mixture of power rugby and skilled passing, they set up a 26-0 lead.

With flanker and co-captain Sophia Haley rattling teeth with he tackles, they put pressure on the Crimson attack, which found itself, for the most past, pinned in their own end and unable to secure possession.

Center Emily Henrich was once again active in all aspects of the game and got smart go-forward every time she touched the ball. The halfback combination of Ale Ada and Abby Savin communicated well, and it was only a little mistake here and there, and a little white-line fever that prevented Dartmouth from scoring early.

Eventually, though, the interior attack sucked in the defense and slick passing put fullback Lilly Durbin in at the corner for a 5-0 lead. With Harvard prop and co-captain Erica Jarrell in the sin bin, Dartmouth was able to build on that lead. Smart phase work eventually saw front-rower Lauren Ferridge break a couple of tackles and get through. Moments later another forward, this time Asialeata Meni capped off a nice set of offloads to score out wide. Savin converted the one in front of the posts and also the one out wide. Then a good kick chase eventually led to a scrum five meters out, and it was a simple matter for No. 8 Idia Ihensekhien to blast her way over. Savin converted and it was 26-0.

As the half drew to a close Harvard finally got some possession, poaching in the breakdown and capitalizing on a couple of silly Dartmouth penalties. A quick tap and run put them, finally, in the opposing 22 and Sabrina Kim was over to make it 26-5 at the break.

Dartmouth tried to stem any thoughts of a comeback with two quick tries in the second half. They punished the dropped kickoff with some safe work in the breakdown and then Ava Procter charged up the middle. Sophie Ragg took a wide ball and was in to make it 38-5.

Harvard’s reply was a break by flyhalf Alex Pipkin to set up freshman center PK Vincze under the posts. That try seemed to energize the Harvard team, and even when a clearance kick was blocked, they made some nice lemonade out of those lemons.

From that block it was student body right and some nifty passing led to wing Emma Kearney cutting her way past for a try. Moments later Kearney put on an even more impressive rugby, and suddenly there was a little scoreboard watching at 38-24.

Up only two scores with 20 minutes to go, Dartmouth regained some momentum with Procter finishing off a long period of possession from the Big Green. Elianne Sacher scored off a series of offloads and straight-ahead runs from the Crimson, but there wasn’t enough time for more.

Overall it was a hugely physical game, but one without many high or dangerous tackles. Ferridge was impressive in the open field and the set piece, with the back row of Haley, Procter, and Ihensekhiento was immense, with procter’s defensive contribution outshining her try-scoring. Henrich’s passing, communication, and tackling were game-changers, and the pack as a whole was very impressive come scrum time.

For Harvard, the center pairing of Vincze and  Brogan Mior made plays, Jarrell set the tone up front, and Kearney showed an ability to turn the game around.

“What really mattered for us was the second half and how we adapted with a really young team,” said Harvard Head Coach Mel Denham. “We just needed  the ball. We hadn’t had that pressure yet and we hadn’t had the ball and we just needed to work through it. Getting one try in before halftime was important; we felt it on the sideline. We’ve really had to adapt to pressure but it’s hard when you don’t have that pressure.”

“We had a similar kind of game and a scoreline against Army earlier in the season,” said Dartmouth Head Coach Katie Dowty. “As a team we wanted to build on the lead and make sure we didn’t let them back in the game, but they came out really hard and they really challenged us at the breakdown. So once we build a lead like that we’ve just got to have better ball security in the second half so we can really close it out.”

Certainly these two teams could be seeing each other in the final November 20. Dartmouth showed flashes of being a machine, while Harvard showed plenty of heart and the desire to put adversity behind them.

Notes: It was senior day at Dartmouth and it was also parents weekend, and so the game was well-attended by family and friends as seniors were given special recognition.

The teams held a moment of silence for Brown University Head Coach and former USA captain, star player, and coach, Kathy Flores, who died this week.

Dartmouth is now 6-0, Harvard 5-1, with Army and Brown right behind at 3-1-1. Army plays Harvard next week but can’t catch the Crimson for 2nd. Quinnipiac can conceivably pass Brown for 4th and a place in the semis, but would need Mount St. Mary’s to beat Brown November 6.