Dartmouth Holds On to be NIRA D1 Champions

Dartmouth Holds On to be NIRA D1 Champions 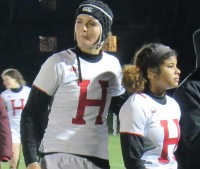 Two brilliant tries from Ariana Ramsey and a devoted defense saw Dartmouth through to their second-straight NIRA D1 championship.

The game, played at Dartmouth, was hosted on Burnham Field, normally Dartmouth's soccer stadium but re-adjusted for rugby to avoid the risk of a frozen pitch (it was cold and Burnham's grass is heated). Shown live and now on-demand on ESPN+, the game was an excellent showcase of the top level of play.

Both sides went into the game missing some players of exceptional skill and much experience, but it had to be a case of getting the best out of who you had. Dartmouth, for their part, had Ramsey back after injury, and she produced some big players.

Both sides also felt they needed to use the boot the put the other under pressure. The kicking from flyhalves Kristin Bitter (Dartmouth) and Brogan Mior (Harvard) was very good despite the cold. although there were a couple of kicks both would have liked back.

Dartmouth's swarming defense led to the first points of the match, with the D forcing a knock-on that led to a Dartmouth scrum in the Harvard half. Dartmouth went wide and then back to the middle, where Harvard was pinged for not rolling away. Bitter lined up the penalty and was good with the kick. Neither side was particularly interested in give the other any chances and the work rate on defense was very high, so scoring chances were hard to come by.

A brilliant break by Harvard fullback Victoria Stanley put her well into the Dartmouth 22 and then she fed wing Cameron Fields. But Ramsey was shadowing Fields and when the Harvard wing took the ball, Ramsey took fields down.

Still Harvard was in the right part of the field and forced some really risky passes by Dartmouth near their line. It was desperate times for Big Green. Harvard got a five-meter scrum and No. 8 Charlotte Gilmour was almost over. So was Stanley. The Crimson got a penalty and tapped, and finally, off a ruck, Gilmour picked up, stayed low and was over. Harvard led 5-3 after 22 minutes.

An exchange of kicks right after that set up a key moment for Dartmouth. Hooker Asialeata Meni fielded a little pop kick and weaved her way around a couple of defenders to get in front of her support. It was a short run but a meaningful one. From there lock Josie Harrison took it up with a strong carry and then the ball was sent from scrumhalf Sadie Schier to center Ava Proctor, who set up prop Seven Sassano for another withering run.

Harvard, a little stretched and a little fracture, but not much, then saw it go wide from Bitter to flanker Sophia Haley to Ramsey. The Olympian got the ball 40 meters from paydirt with four to beat. She cut inside to dismiss one tackler, and then outpaced two chasers before stiff-arming the last and racing in for the try. Bitter's conversion was good and it was 10-5 Dartmouth.

Eight minutes later it was 15-5. This time Dartmouth took a lineout inside the Harvard 22 which was tapped back by flanker Nyah Cordero and rescued by Haley. A snappy unders line from the backs put fullback Anjali Pant in the clear thanks to a quick catch-and-pass from outside center Sophie Ragg. Pant drew the attention of two players before passing to Ramsey, who was caught just as she crossed the line but was able to get it down.

Two tries for Ramsey and a 15-5 lead for Dartmouth.

Amazingly, that was it for Dartmouth's scoring. Throughout the second half they played a ton of defense, but to their advantage much of that was in Harvard's end of the field.

Harvard needed a big break but it was just so difficult to find the gaps. Dartmouth was able to make some key turnovers, and Ramsey's contribution was less about scoring tries and more about breaking tackles to get her side out of their 22 and on the front foot, which she did several times.

Dartmouth did have a good chance with wing Simone Bautista in space but she was summarily introduced to the grass by Mior to save a try.

Finally it happened for Harvard. Their patience on attack produced a penalty and Mior set up the lineout. Harvard went wide and Ramsey intercepted the pass and perhaps might have gone all the way, except Dartmouth had collapsed the Harvard maul. Another penalty and Cassie Depner in the sin bin. Another lineout, and the maul was stopped dead, but quickly Harvard scrumhalf Reese Morgan spun it wide where center Alex Pipkin somehow sidestepped out of a tackle and somehow offloaded to Stanley, who sent a perfect leading pass to Fields for the try in the corner.

No conversions from out wide on this cold knight, when the ball felt like concrete, but Harvard was within a score at 15-10.

Harvard was back on the front foot after that. Fields, and flanker/wing Lennox London were both in position to do some damage but the pass never got there. Dartmouth's tackles were ferocious and they often knocked the ball loose as a result. As time frittered away it was Dartmouth that finished the game looking to score. Prop Lauren Ferridge came close and so did both Haley and No. 8 Nicole Ihensekhien. And yes a try would have sealed the deal, but in a way it didn't matter. It took time and field position away from Harvard, and that's all Dartmouth needed.

In the end it was a game of great tactical and physical tradeoffs, and a fitting end to the season. Harvard, having rebounded from a close loss to Army to beat West Point a week later in the semis, keeps inching closer to the title they won back in 2019.

For the Crimson, Mior ran the game plan well and prop Michelle Groth along with lock Caroline Kinghorn put in a ton of work. Stanley was dangerous, but they didn't get enough ball into the hands of one of their top try-scorers, London. For Dartmouth, that back row of Haley, Ihensekhien, and Cordero was excellent, and Bitter, as well as Ragg at center, have big things ahead of them. Ferridge and Sassano were essential in the front row, but it was Ramsey who broke open the game, and she was the deserved MVP.