The D2 Bracket by the Numbers

The D2 Bracket by the Numbers

Some fun thoughts on the Men's D2 Playoff bracket.

Competitiveness. Seven games could be described as close, which in our minds means within 14 points. Seven out of 15 games played so far is ... not great but not horrible. Only two games were within a try.

Forfeits. There was a forfeit, with Bucknell not able to play due to injuries. This happens every year in one playoff or another, and in fact with COVID still around being a concern it's a miracle there weren't more.

Big Wins. We said a close loss was being within two converted tries—14 points—so we decided to double that to define a Big Win. Any win by more than 28 points is characterized as such. There were seven. So there was only one game that fell between the two threshholds. Interestingly, that was Marian over UNC-Wilmington, 53-26—a margin of 27 points. So essentially we either had really close games or not at all.

Outperforming the Champs. It can happen that a team that lost their conference final might end up finishing higher nationally than their conference champion. This year seven conferences had more than one seed into the national tournament. Of those, two conferences had three seeds. Only one #2 seed outperformed its same-conference #1 seed, and that was Northern Iowa. UNI lost a tight Great Midwest final to Illinois State, but this past weekend edged Marian while Illinois State was beaten fairly handily by Adrian College. Neither #3 seed outperformed a same-conference #2 seed.

Varsity Programs. Five varsity programs are in these playoffs. They have gone, so far, 8-2. Principia lost their only game. Marian lost also, but won two games before that. The other three, Norwich, Adrian, and Thomas More, are in the semis.

We counted the Bucknell forfeit in here. This isn't dispositive because you've got a team that won a play-in game and then lost big measured against a team that entered straight into the Round of 16 and lost close. This ranking therefore is tough on the Allegheny and nicer to the Cardinals ... and flatters Northern Lights.

Here's the bracket filled out with the matchups for Dec 10 in Houston. 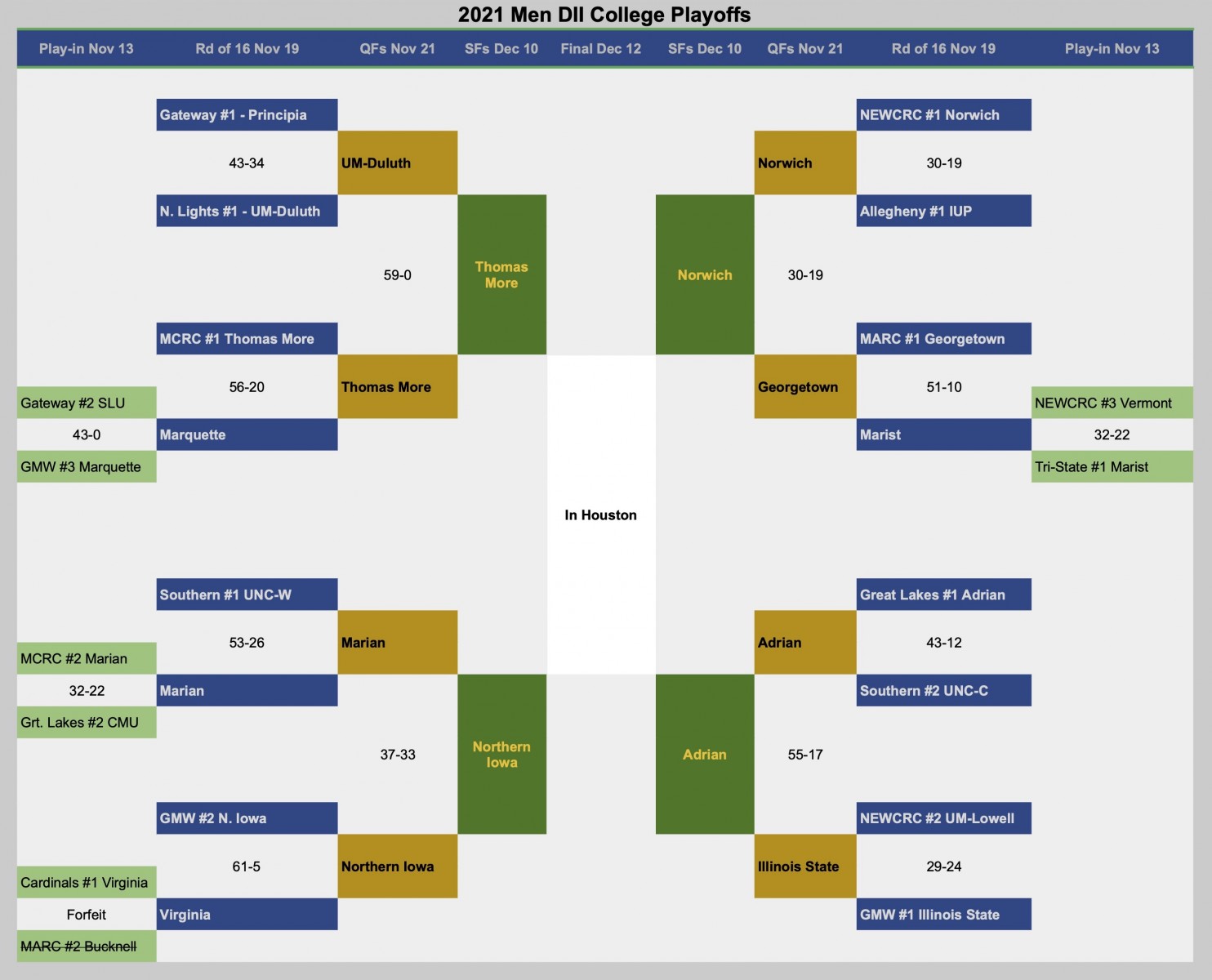