Check Out The Venue For The LA 7s

Check Out The Venue For The LA 7s 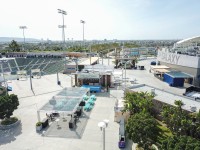 The venue hosting the LA 7s February 29-March 1 has undergone some major upgrades in the last few years, making Dignity Health Sports Park—slated to be the rugby venue for the 2028 Olympics—something of a newly-burnished jewel on the rugby landscape.

Upgraded in part to accommodate the Chargers NFL franchise moving to LA, and also as part of the growth of the LA Galaxy, Dignity Health Sports Park will host the USA stop on the Men's Sevens World Series.

Here's a look at what upgrades make Dignity Health Sports Park an excellent venue for a full weekend of international 7s rugby:

More News On LA 7s and the LA Invitational

North grass pads – Full improvements to north end of the stadium behind the berm, including shade sails, TVs, and picnic areas.