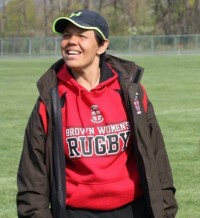 The victory put Brown at 3-1-1 in the National Intercollegiate Rugby Association DI, good for 3rd behind Harvard and Dartmouth.

(West Point was scheduled to play Long Island University but that game was canceled. If that game is recorded as a forfeit, Army would move to 3-1-1 and ahead of Brown due to more bonus points.)

Brown opened up with a bit of a surprise try as scrumhalf Gemma Ryu picked up from the base of the breakdown and burst through. A try from 40 meters out and Brown was up 5-0.

Moments later, lock Jo Bandler stretched her legs and rambled over. Olivia Duba’s conversion made it 12-0.

Duba then launched a long wiper kick for her chasers to follow and sophomore wing Morgan Cunningham raced in to gather and score. Duba’s conversion made it 19-0.

As the first half came to a close Quinnipiac fullback Kat Storey cut through for a key try for a 19-5 halftime score.

That try seemed to spark the Bobcats and the comeback was on. Quinnipiac scored two more tries in quick succession and suddenly it was 19-15 and Brown was in a little trouble.

But then Duba found some space and cruised through. She converted and it was 26-15. That was a key cushion for Brown because Quinnipiac came back for one more try to inch within six at 26-20 with 12 minutes to go.

It was a tense 12 minutes, but Brown was able to close it out.

The game was emotional in several ways. It was close throughout the second half. It put Brown in a good position in the NIRA standings, and it was parents and alumni weekend.

But more than that, much more than that, the players had to win this for their coach. American rugby legend and US Rugby Hall-of-Famer Kathy Flores has been privately battling a serious illness for some time. She has been gathering her strength and resolve to be there for her team, but today she was unable to be there.

Her absence was felt keenly by the Brown players and the coaching staff and fans, and for the rugby community as a whole, not seeing Kathy Flores on a rugby field as either a player or a coach when there’s a game on has been unthinkable for over 40 years.

For Brown rugby, that win was, therefore, more than just a win.