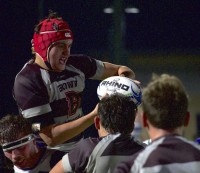 Brown University has won the NCR D1 men’s college championship with a powerful forward performance and a defense that gave up exactly two tries in three playoff games over the late fall.

Saturday night in Houston at Aveva Stadium, Brown stifled Queens University Charlotte, and, for the most part, didn’t allow them to get into their game, winning the final 21-5.

For Queens, they will rue some mistakes throughout the game—you just can’t give up holding-on penalties in your own 22 and expect to win—and especially the failure to score at the end of the first half when they were right on the line.

This game will be remember for how Brown stepped up and showed the nation that it’s a very good program, but it will also be remembered for how many cards were shown. Referee Ian Seaton, not one given to emotional penalizing, issued, by our count, nine yellow cards and one red card (correction—after checking with officials we believe it was eight yellow cards, with two of those cards going to the same player, giving us two separate red cards). The game actually ended on a cardable offense but Seaton wisely just blew the whistle and ended the game.

The cards were for a variety of reasons—foul play, repeated infringements, not retreating 10 meters on a penalty, and a late-game dust-up—and the red card was for a dangerous play, taking the ballcarrier down by his neck into the ground.

Brown absorbed some Queens attacking moves early but defensively seemed very comfortable. They were up quick and gave Queens players no time to make a read. And if support was slow to the breakdown, they were losing the ball.

After the first scrum saw Brown shove Queens back over onto themselves the Ivy Leagues knew they had something there. While Queens did get a few penalties off the scrum (early shove, boring in) overall that part of the game belonged to Brown.

Brown took an early lead when Queens were guilty of not rolling away. It was a repeat infringement so they got a yellow card for that, and flyhallf Raphael Lansonneur put the kick over for a 3-0 lead.

The scrum pressure started to show and Queens kept hurt their own momentum by giving up silly penalties. That led to Brown getting close to the Queens line, and after the scrum went down one time too many, referee Seaton called a penalty try. Seven points for Brown and another yellow card for Queens.

At 22 minutes Queens No. 8 Haydon Johnson was penalized for that dangerous tackle and received the red card. Overall the card didn’t cause Queens too much trouble, but it deprived the Royals of a multi-skilled player.

Both defenses tightened their belts and got to work, and really the only thing giving Brown the run of play was that if they were forced to drop the ball thanks to the powerful Queens tacklers, they could often get it back in the scrum.

Near the end of the first half Queens hooker Martin Pierce reeled off a massive run covering about 50 meters. He was tackled, and tackled high, leading to a penalty and a yellow card, and Queens were in business. Even when they lost the ensuing lineout they had Brown on the ropes and ran several tap penalty moves (as Brown got another yellow for not retreating 10 meters). The Royals got right down to the line, but no further as they were a shade frantic when the line beckoned. A knock-on at the try line killed their best scoring chance and the half ended with Brown up 10-0.

Queens entered the second half realizing they were up a player (14 vs 13) and could exploit that. They Royals played open and quick and a quick, flat pass to wing Pierce Griffin netted them a try in the corner. That made it 10-5 and Queens seemed to be in business.

But as the Brown players came back on the field, they ramped up their line speed on defense and that quick, accurate attack from Queens struggled to return.

Brown got a penalty almost immediately after the restart and Lansonneur slotted the goal easily. That made it a two-score game at 13-5, but the penalty seemed to have more power than that … answering immediately took away the momentum Queens had created.

The half continued to be back and forth as neither side could really run enough phases. Both sides were quick to try to poach ball and Brown was a little better at that.

At 60 minutes Queens got a penalty and set up the lineout. Their maul moved forward and they looked in good position, but as they spun off to spread the point of attack they were pinged for holding-on. It was a dumb penalty as Queens needed patience at that moment. Brown then worked their way down the field, got another penalty (and Queens a yellow card for collapsing a maul), and finally the drive worked for Brown. Prop Dan Archer crashed down to score it, and it was 18-5.

Brown would add another penalty, this one from scrumhalf Dylan Lewis, but it was all about Brown’s defense.

“We have taken pride in our defense all season,” said LaFlamme after the game.

The Brown front row of Archer, Henrique Gabriel and Joe Al-Hasso, along with their second row mates Oliver Corbett and Kaspar Pitbaldo, deserve a lot of credit for the work they all put in. No. 8 Antonio Esteves was named MVP but this was certainly a team win.

In the end Brown got more cards than Queens, including two at the end of the game (for two different infractions but given at the same time). But whether they had 15 or 13 players on the field, they made their tackles all day, and that’s why they are champions.