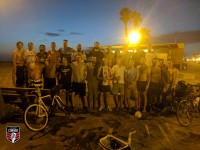 Beach rugby joins with the Sevens World Series at the upcoming LA 7s event and it’s a chance for any rugby fan to embrace this unique version of the game.

Usually played 5-on-5 or 6-on-6, beach rugby is hugely popular as a not-very-serious way for rugby players of any background to get some exercise and mix with like-minded people. During the LA Invitational, which leads into the LA 7s, there will be a Beach Rugby tournament on Friday, February 28.

The laws are fairly simple and most tournaments play some version of touch—some play six touches (tackles) without scoring forces a turnover, others force a turnover after just one touch—while there is also tackle Beach Rugby. The LAI will have both touch and tackle.

USA Rugby’s series of Beach Rugby tournaments around the country use the six-touch rule.

“It’s a game for all walks of life,” said Dallen Stanford, former USA 7s player and current well-known commentator, who regularly plays Beach Rugby in Santa Monica. “You’ve got players who are 19, or 55. The sand kind of helps negate some of the differences in speed, and if you’ve got a good sidestep, the sand can help defend that, so it’s a really good equalizer.”

Register To Compete In The LA Invitational Here >>

“The tone of the games is, it’s competitive, but it’s just a game,” he said. “You’re there playing because you love rugby and you want that exercise. We work by the rules that if a defending team calls an infraction, you just go with it.”

And the experience for the LAI Beach Rugby tournament, which runs just the one day, will be extra special.

Tickets for HSBC LA SEVENS are on sale at www.LAsevensrugby.com or by calling 1-888-9AXS-TIX. But registered LA Invitational teams staying at partner hotels get discounts on tickets, so register your team first.

“Playing on these amazing beaches in Southern California is the best,” said Stanford. “You’re barefoot, on the sand you can watch the sunset or go for a swim afterwards. You can just hand out and enjoy it.”

USA Rugby runs a series of Beach Rugby tournaments throughout the year. The next one will be on December 14 in Santa Monica, but there are also events in Chicago, Cleveland, Seaside, Ore., Virginia Beach, Va., and Hollywood, Fla.

The LAI 7s Beach Rugby will be held Friday, February 28 only, with Manhattan Beach the likely venue.

Register To Compete In The LA Invitational Here >>

The games will be close to the beachfront nightlife with the restaurants, bars, and clubs along Manhattan Beach and in nearby Redondo Beach and Hermosa.

Athletes can play Beach Rugby on Friday and connect with their rugby friends, step off the beach and have some fun in the evening, and watch the LA 7s tournament over the weekend.