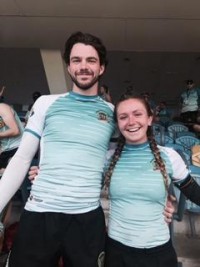 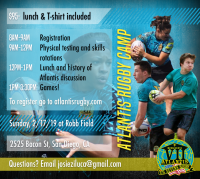 The Atlantis elite select side has announced that Sophie Pyrz and Jack Bradfield have become the first former Atlantis High School players to play with the senior Atlantis women and men’s teams on an overseas tour.

Atlantis was a senior men's and women's program only for many years before adding high school teams. Their trip from high school to senior rugby was, in both cases, aided by several Atlantis alumni and alumnae coaches.

Jack Bradfield
Jack Bradfield started playing rugby in 2010 at the age of 12. His first high school rugby was for St. Edward HS in Cleveland, Ohio in 2013.

Bradfield – who can play every position in 7s – succeeded his brother Ryan (#957) as an Atlantis player. Bradfield's first Atlantis tournament, at 15, was the Surfside Sevens in 2014 in Stone Harbor, NJ, where he became Atlantis #1001, following Biddy Boyle’s (player #175 and staff #97) son Liam, Atlantis #1000. That team was coached by Jack Foley, Atlantis alumnus (#402 and S#108) and presently in charge of the Atlantis Boy’s HS Elite 7s program.  Bradfield also played under Chris "Pudge" Ryan (Atlantis #157 and staff #48) in the Atlantis Barbados tour of 2018.

The December 2018 tour of Barbados was Bradfield’s first appearance for the Atlantis Senior VII.

The 22-year old Sophie Pyrz started playing rugby in 2012 for Doylestown HS, under Atlantis coach Stacy Mancuso (S#111).  She first played for the Atlantis Elite High School girls in 2015 at the Las Vegas 7s under Atlantis coach Tom Feury (S#19), and also suited up for the Rugby Pennsylvania All Star team from 2013 to 2015.

Pyrz - a scrumhalf and flyhalf in both 7s and 15s - joined the Penn State Women in 2015 and played for their 2016 and 2017 national championship teams. She’s also been a full-time resident at American Rugby Pro Training Center (ARPTC) for last three years.

Like Bradfield, Pyrz got her first overseas tour with the senior Atlantis Women’s team in the December 2018 Rugby Barbados World Sevens tournament.

“Atlantis helped me to realize my love for 7s and has taught me many skills that I bring to every game and practice," said Pyrz. "The variety of coaches and staff are very supportive and collectively have mounds of tactical and technical skills to help players succeed. The overall culture of Atlantis is one that I love to be a part of due to its rich background and inclusive nature … I hope to one day play 7s at the international level.”

Pyrz has also been coached by two both player and coach Atlantis alumnae: Kate Daley (#750, S#163), Penn State Women’s Coach and US Women National Assistant Coach, and Julie McCoy (#392, S#104), former US Women’s National Team Coach as well as Founder/Coach of the ARPTC.

Atlantis has multifaceted goals. One of our most important is to develop promising players and improve their level of play (and ours) by mixing them with more experienced and accomplished players.

When invited to top-level international tournaments, we assemble teams representing the very best the US has to offer. We have also included accomplished players from other countries. Besides helping us succeed on the field, they can have an important role in developing less-experienced players and helping them achieve success.

Recently, to further these competitive goals, Atlantis has implemented a program of camps and clinics to be able to develop players in a controlled environment under the tutelage of excellent and experienced coaches. Atlantis’s next camp will be February 17, 2019 at Robb Field, 2525 Bacon St, San Diego, CA. Questions about the camp contact Josieziluca@gmail.com. https://www.atlantisrugby.com/camps