The Atlantis Boys select side teams enjoyed a very successful Las Vegas Invitational this weekend, both making their respective bracket finals, and winning one.

For the U16s, their weekend started with a 17-7 loss to EIRA on Friday.

“We made some mistakes in that game,” said Atlantis U16s Coach Greg Schor.

But they crushed the Mavericks and then got a forfeit win when Evolution 7s was a no-show.

So that set up the California-based Rhino Rugby Academy.

“They are a very good team,” said Schor. “It was close all the way but we were able to beat them. Then we played EIRA again, and our guys were really up for it. They wanted to show that they are getting better.”

And then the final, where Atlantis controlled the game against Rhino 2 and shut them out 17-0.

“They were strong in the forwards, but we played great defense, and the guys got better and better each game,” said Schor. “This was a much stronger competition this year and all of the teams are much better.:

For Atlantis, Archmere Academy forward Dan Bark was a solid presence, while captain and flyhalf Mike Weir of Doylestown was a leader and a commanding influence. Most of these players know each other well, but one of the newcomers to the team, Gonzaga HS Ryan Ebel was a strong runner throughout the tournament. 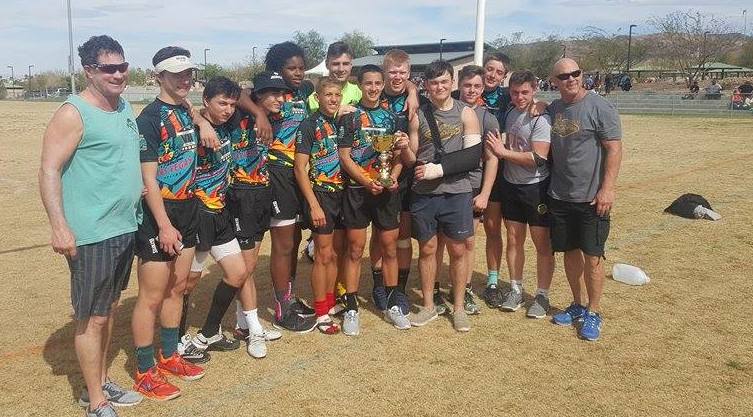 That opener against Upright was a bit fraught with issues. Atlantis trailed 12-0 before picking things up.

“We came back to win and from that point on we just kept improving,” said Coach Jack Foley. “This bracket was incredibly competitive, and our guys were just awesome - they had a great attitude. We flew out a day earlier and that extra training and team bonding night really helped. It’s a testament to the players.”

So after a close win over EIRA, on to the semifinal against ATAVUS, which Atlantis won 27-12.

“That was one of the best high school 7s games I have ever seen,” said Foley. “The kids were just spot on.”

But after that Atlantis had less than an hour until the final in the stadium. BC was fresher, and Atlantis ran out of gas 25-5.

But it was another impressive showing from the Atlantis program, which, remember, didn’t have any youth teams a couple of years ago, and now is a major player on the HS all-star scene.