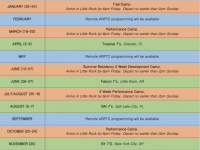 The program will include in-person camps and virtual programming between camps, allowing players who can be at the ARPTC facility in Little Rock, Ark., and those who can’t, to participate.

After very successful summer and fall women’s camps, in which athletes and coaches embraced some stringent COVID protocols, bubbling, and gradual steps to on-field activity, ARPTC has reported no positive COVID tests.

“If we had failed in the fall I’d have taken my licks and looked at what we needed to change,” said ARPTC Director and medical doctor Julie McCoy. “But we have really responsible people who want it to be successful. The women really embraced what we were doing.”

Lauren Ebeling, who will be one of the coaches in the HS camp, also has a degree in public health and said she was very impressed with the ARPTC protocols.

“All the players, including the younger girls, we super receptive to what we needed to do during the fall,” said Ebeling. “We’re all just so thankful to play, we want to do whatever we need to in order to make that happen.”

Now turning their attention to high school players, McCoy said the camp is open to all levels of players, as long as they are motivated to learn.

“We’re looking for athletes who want to develop their rugby IQ and who want to embrace an environment of learning,” she said. “We realize that only a small percentage of players will become Eagles, but everyone can learn and get better. And if you work the program correctly, the players who don’t do on to the Eagles support the girls who do.”

With McCoy, Laura Cabrera, and Ryszard Chadwick all heavily involved in the coaching, ARPTC is also bringing younger coaches into the program to develop those who have an aptitude for being a mentor.

Lauren Ebeling and Ali Hale were in the ARPTC fall program and were invited to coach with the high schoolers.

“The game of rugby has changed my life,” said Ebeling, who started playing at 18 while going to college in Chicago, and has suited up for the Chicago Lions 7s team and Chicago North Shore WPL team. “I want to pay it forward, and it’s been a privilege to do it with ARPTC as they’ve given me so much.”

Ebeling, who captained the ARPTC in the Barbados 7s in 2019, said she got involved with ARPTC because she wanted to improve. She wasn’t thinking about the national team or anything specific like that; she just wanted to rise to a challenge.

“I love getting out of my comfort zone and pushing myself,” she said. “I have been trying to improve in rugby as much as I can because the sport is my biggest passion.”

ARPTC is looking for more players with that passion and desire to get better.

McCoy has been receiving a lot of positive feedback from parents who have sent their daughters to ARPTC assemblies.

“Not all our staff is women, because men are still on this planet and it’s important for young players to learn how to be coached by them, but we have a lot of women on-staff and that is a big attraction to the players and their parents,” explained McCoy. “If you want a young athlete to find her feet, grow in confidence, and mature, and to learn about all that from a woman, is really valuable. A lot of parents, especially the dads, tell me that’s why they send their kids here.”

The ARPTC 2021 High School Player Development Program includes chances to play in tournaments (should they be held) and camps in January, March, June, August, and October. As well, there will be virtual programming in February, May, and September.

See the graphic above left for details, or go here>>