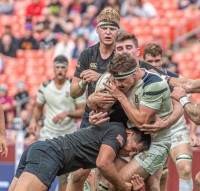 West Point beat Navy 24-17 Saturday at FedEx Field to clinch 1st in the Rugby East Conference and also put the Black Knights on the inside track to win the Commander-in-Chief Trophy, played among the three military academies.

The game was tight throughout, with Navy coming back from a 17-0 deficit to tie it 17-17. Michael Amberg's try with about eight minutes to go turned out to be the game-winner.

An Intensity Like No Other: Army Prepares for Navy

Army-Navy Game Something Special for Midshipmen

The Black Knights lineouts were a big part of their offense from kickoff. Success there enabled the physical Army side to march down the field by controlling the maul. Within the first few minutes Army had this going. Navy set up a strong defense to thwart Army’s controlled pressure but penalties gave Army the ball bac, and after a the third penalty by the Midshipmen, Army went to the lineout again. The Black Knights mauled to the tryline and then Army flanker Koi Koi Nelligan broke off the back. But Navy's defense held and after a penalty by Army were able to get out of trouble.

Navy answered back with their own driving lineout, but when they kicked, Army was able to counterattack. Army wing Mike Amberg caught Lewis Gray's kick, linked with flanker Steven Rohde and he unloaded back inside to No. 8 Lucas Pattison, who was able to break through. Pattinson flicked the ball to supporting scrumhalf Tiaan Mosconi and he was in. Flyhalf Sean McNulty converted and it was 7-0 Army.

The West Point team continued to knock on Navy's door and around 13 minutes McNulty saw some space in-goal and popped a short kick-pass to Nolan Green on the wing. Green nabbed it and was in. Another good kick from McNulty and it was 14-0.

Down 14-0, Navy fought back by playing through their forward pods. No. 8 Jack McMann led the charge but a quick-tap on a penalty by scrumhalf Sean MacLaney helped as well. Into the Army end for the first time, Navy was, however, unable to get points, and later on it was Army that scored again, with McNulty slotting a penalty to make it a 17-0 lead.

But Navy started to claw back with the forwards, led by props Adam Tounkare and Jack O'Hearn, testing the Army defense. Several Navy forwards got in on the act and as that sucked in the Army defense, Gray was able to put center Frank Bell through. He was stopped just short of the tryline, Navy got a penalty, and lock Ben Rossi was put over. Gray converted and it was 17-7.

Navy continued to put pressure on Army into the second half, with backs Bell and Jake Aleman coming close to scoring. After a penalty at the tryline by Army, Navy ran the forwards, and after several phases, with captain and flanker Colin Brennan cleaning out repeatedly, lock Peter Ratnayake took an outside channel and crashed over. Gray was good on the kick and now it was 17-14.

The game was poised for a dramatic finish. Both teams were putting all they had into it and Army let a mental error creep in. Playing the ball on the ground game Gray a chance to tie the score, and that is what he did.

Both teams continued to pound on each other for the next 15 minutes, trading possessions. Navy tended to keep the ball moving forward but stellar Army defense stopped them. Then, at the 72-minute mark, Army mounted a small attack that unleashed Amberg through the middle of the field, and suddenly he was gone for 40 meters and a try. McNulty converted, again, and now it was 24-17. It was a dramatic score, made perhaps a little more dramatic because the All Blacks, waiting to take the field to warm up before the test match played a little later, were watching.

The game looked like it was just about wrapped up for Army despite a few Navy fast break attacks in the final moments of the game. On what would have been the final play of the game, Army received a penalty and instead of choosing to kick the ball through the end line, chose to go for points. McNaulty drilled it into the left upright, putting the ball back into play. Navy recovered the missed penalty kick and drove down the field, got a penalty for not releasing the tackled player, and kicked for touch. They had one more shot, but the lineout had served Army well and this time they were able to steal the ball and kick it into touch to seal the win.

The game left Army at 5-0 in the Rugby East, although this was the first time the Black Knights failed to get four tries for a bonus point. Still, at 24 standings points they can't be caught. Army is now 6-1 overall, with their lone loss to Dartmouth in a game where they played a different lineup that usual. Next up will be the Air Force Academy in Colorado Springs on November 6. Air Force has already lost to Navy so a win or a tie here would give Army the Commander-in-Chief Trophy. Six days later the Black Knights face Lindenwood at West Point.

For Navy, they play Kutztown this coming weekend, Penn State, and then Dartmouth. Those first two games will be targeted for the Midshipmen to finish 2nd in the Rugby East.