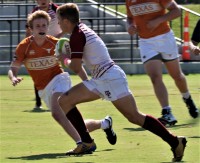 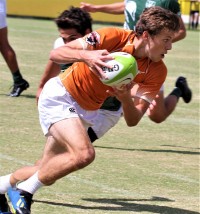 Texas A&M scored on the final play of the game to beat Baylor 26-19 in the championship match of the Red River 7s over the weekend.

Tha tournament, hosted by the Houston SaberCats MLR team, was the official qualifier and championship for the DIA conference.

Full video of the tournament here>>

North Texas put in a very good showing, taking third over Oklahoma 28-17. UNT lost to Baylor in the semis by a conversions, 21-19. Texas Tech defeated Texas 17-5 to take 5th, while LSU took 7th.

TeShay Flowers, who runs the conference, said the turnout was good but as usual the conference suffers from competition with football. That, in fact, was why the 7s tournament was moved from the spring to the fall.

"You can handle it when you have one or two big-time football programs in a [rugby] conference," said Flowers. "But we have six and they were all playing big games over this past weekend."

That's why the conference has moved most of its rugby 15s season to weekends after football is over.

"We want more on-campus support and we can't get that unless our teams are playing on-campus," he said.