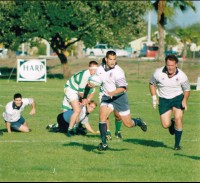 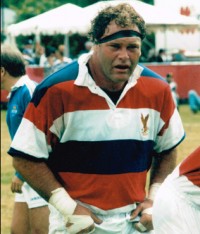 Chris Lippert was something of a trailblazer for the USA team.

He was one of the first Americans to play for the storied Barbarians touring side. He played ten years for the Eagles when playing five years was considered a long career. He was the first USA player to surpass 35 caps and his 38 caps was a USA record when he retired in 1998. The record has since been broken but it still speaks to how much of a fixture he was at prop for the Eagles in the 1990s.

In 1987 Lippert led San Diego State to a perfect 13-0 record and a national collegiate championship. It remains the high water mark for the Aztecs program, a program Lippert has been involved with his entire adult life.  He stayed in San Diego and played for Old Mission Beach Athletic Club, helping make OMBAC one of the best clubs, if not the best, inthecountry. OMBAC won five national titles from 1989 to 1996, with Lippert the front-row stalwart in all of them.