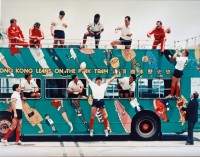 Tony Ridnell was the pride of Old Puget Sound Beach and was the towering force on their back row and 7s forward pack as Beach began a run of four national 7s club championships in five years.

A physical flanker who was skilled at anticipating play, adding dimension to his game. Ridnell played rugby in high school back when that wasn’t a thing, and then reacquainted himself with the game while at West Point, suiting up for Army in his final two years in 1981 and 1982.

Ridnell was commissioned in the US Army and while he served his continued to play, helping lead the Combined Services team that toured England in 1985. That tour helped show Ridnell that he could play at a higher level, and it was the goal of making the USA team that prompted him to leave the US Army after six years.

His last posting was Fort Lewis in Washington, a desirable posting in the Army because of the natural beauty and quality of life in the Pacific Northwest. He remained in that area through his rugby career as TR, as he was often known, earned 14 caps, including in two Rugby World Cups, and over 70 appearances for the USA 7s team.

Big, powerful, and grouchy enough to be an international lock, and mobile and sneaky enough to be a loose forward, Ridnell put in perhaps his best performance in 1991 against Scotland in Hartford, Conn. when the Scots toured the USA. In a game that didn’t always go the USA’s way, Ridnell was a terror throughout against a team that was among the best in the world at the time.