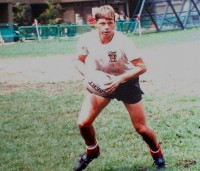 Tommy Smith was a supremely talented 7s and 15s player, who was good enough as a 15s backline player to be selected for a World XV that beat the Barbarians in Hong Kong in 1981.

He had started playing in Washington DC before moving to California and starring for Santa Monica. An excellent 15s player, he was even better as a 7s player, being named to the All-Time team for the Hong Kong 7s on the tournament's 20th anniversary. He is the only player to be named the Best and Fairest player of that prestigious tournament.

He captained the USA 7s team in tournaments around the world and earned repeated accolades for his elusive running, defense, and ability to turn a game around. He also was not afraid to innovate or bring in some American approaches to 7s. He would use an American Football overhand pass to get the ball wide in 7s, and that tactic was used to great effect.

Not content to rely on his athleticism, Tommy Smith was a student of the game, too. He showed that as the captain of the USA team and later as a coach, running the USA 7s team in the late 1990s and piloting them to some of their best results before the growth of the Sevens World Series.