That moment he leaves Habana behind. Takudzwa Ngwenya on the way to scoring against South Africa in 2007. Ian Muir photo.
01.06.2021 - Alex Goff 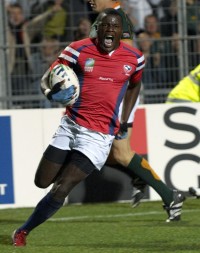 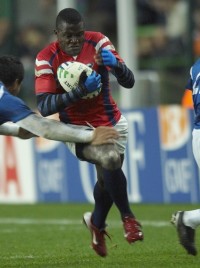 Takudzwa Ngwenya came to American from what he described as a very difficult life in Zimbabwe.

He came to attend college in Dallas, and was quickly noticed for speed and ability to break a game open. Green, skinny, shy, he emerged as a seasoned professional with strength as well as pace, and one of the most recognizable personalities in the American game.

Ngwenya's coming out part was in the 2007 Rugby World Cup. While the USA failed to win a game that tournament, Ngwenya started to emerge when Head Coach Peter Thorburn decided to move him from the left wing to the right. Big deal right? But it made a difference. Ngwenya blazed for a try against Samoa, sparking a comeback that just missed. And then against South Africa he shocked the world by outpacing the great Bryan Habana to score what became the Try of the Year for 2007.

(What people don't remember is that Ngwenya took out Habana again later in the game; the two clashed heads and Ngwenya managed to stay in the contest, while Habana had to leave.)

Those performances earned Ngwenya a contract with Biarritz, where he was also a massive success and a fan favorite. He could score from anywhere, and often did—86 times for the French club. He helped Biarritz to the European Cup final in 2010 and a European Challenge Cup win in 2012.

Z Ngwenya continued to excel in 7s and 15s for the USA, as well as a professional, playing in four Rugby World Cups (three for 15s, one for 7s), and remains among the USA's all-time try leaders. In international and major professional rugby he has scored over 100 tries.

He was, quite simply, one of the most exciting USA players ever.