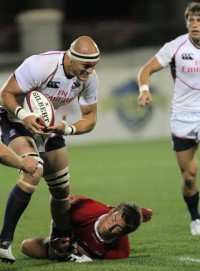 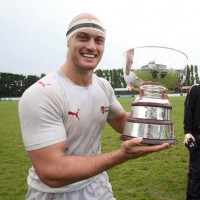 Scott LaValla's high school team once finished 7th at the national championships only to see LaValla be named the tournament MVP.

That happened partly because LaValla's high school team, the Budd Bay Barbarians out of the Olympia, Wash. area, had lost two games on penalty kick tiebreakers before winning the 7th-8th game. LaValla and his mates were just a bit unlucky. The lock-flanker-No. 8 went on to captain the USA U19s and U20s, and then looked to be on track to be lost to college football. That's when he took the path less traveled. With a chance to play gridiron in college, he chose instead to attend Dublin University in Ireland and play for their rugby team, Trinity.

LaValla starred for the Trinity U20s, so much so that he ended up playing on the 1st XV as well. Eventually LaValla would go on to captain Trinity, the first American to do so. He suited up for Ulster's developmental side, the Ravens, as well, and helped Trinity to a national cub 7s title as well.

A versatile forward who was comfortable playing anywhere from #4 to #8, LaValla took a while to nail down a regular USA spot, but he performed well whenever he suited up. When he played for the USA Selects he was named captain, and he was one of the team leaders throughout his six years and 33 caps as an Eagle.

After Trinity LaValla once again took a surprising road. He has well entrenched in Ireland but opted instead to sign with Stade Francais and play in France. The decision which worked out very nicely for him, was typical of his desire to shake things up. He ended up playing over 80 times for the Paris professional club.

LaValla played in just the one Rugby World Cup (2011) because he was injured just before the 2015 tournament. After he recovered he again took a surprising tack, quitting rugby to enlist in the US Army in order to become an Army Ranger.

A versatile and highly intelligent rugby player, Scott LaValla was not a particularly flashy performer; he won lineouts, made tackles, won rucks, and cleaned up bad ball. He was unselfish, almost to a fault, but understood how the game was played and what was his best role in it. At the same time, he was most definitely one to shake up the expected order of things. LaValla was always going to follow his own path.