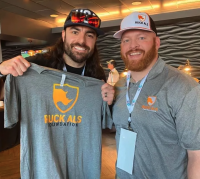 Like some of the early 20th Century players on our All-American list, Nate Ebner hasn't played a lot for the USA, but there's a reason, and that reason doesn't reduce his ability or influence as a player.

Ebner was a USA U19 standout, playing mostly at fullback, and at that age he was good enough to make the senior Midwest All-Star team. (Yes kids, back in the dark ages there used to be an annual all-star championship where the best players in each region faced off with a look to getting a shot with the national team.)

One of the best players on the 2007 USA U19 and 2008 U20 teams, Ebner was also a standout at Ohio State. He was fast, strong, and able to hold his own with much older and more experienced players. Having grown up with the game and played the game in preference to football, he was knowledgeable and unafraid.

Ebner eventually walked on to the Ohio State football team and ended up earning a scholarship. That forced him to back away from rugby, although he did play for Ohio State in the CRC. Drafted by the New England Patriots, Ebner became one of the very best special teams players in the NFL and a three-time Super Bowl champion. He was also a favorite of Patriots Head Coach Bill Belichik, which isn't an easy thing to accomplish, and Belichik gave Ebner permission to try out for the 2016 Olympic rugby team.

He made the team, with his performances in the latter part of the 2015-16 Sevens World Series securing a spot on the team for Rio in 2016. Ebner played ten games for the USA 7s team, scoring two tries, and he scored a try in a somewhat under-performing USA effort in Rio. He also played for the stories Samurai team in the Hong Kong 10s. Every time he parachuted into a team—and really it's not been since his sophomore year at Ohio State that he was on a regular rugby team for any length of time—he has performed at a high level.

This is a bit of a what-might-have-been listing, but it's a fair one. Nate Ebner was always a great rugby player, and was good enough to be a great one for a long time.