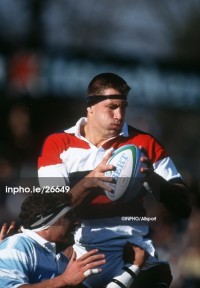 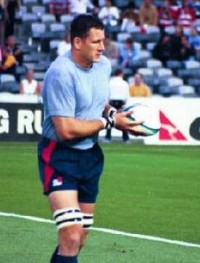 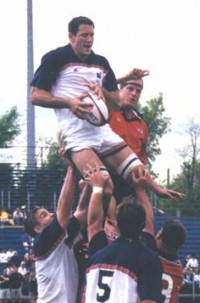 Luke Gross is the quintessential gentle giant, friendly and engaging off the field, but ornery on it.

At 6-9 he was among the tallest players in the game, and while he came to rugby later—picking it up with the Cincinnati Wolfhounds after playing college basketball at Indiana State and at Marshall—he made it last. Gross was among the first USA players to go professional, and his pro career spanned 11 seasons and saw him play for top clubs in England, Wales, and Italy.

He earned his first cap in 1996 and his last in 2003, although he almost broke back into the team in 2007 before injury sidelined him.

A completely unselfish player, Gross was a lineout king, a staunch defender, and a two-meters-and-a-splash-of-mud ballcarrier. He was extremely good at all of these things, and when he retired he did so as the USA's all-time leading caps-earned (a record since broken) and a veteran of two Rugby World Cups. (Funny story: he started 61 of his 62 caps, with the lone time off the bench a game in which he was a late second-half sub and was promptly sin-binned for punching an opponent.)

A recent inductee into the US Rugby Hall of Fame, Gross is one of the great all-time US forwards.