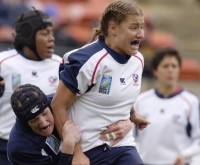 Kristin Zdanczewicz carried the nickname "Ham" for much of her career, so-named because the pronunciation of her last name rhymed with "sandwich" ... OK, maybe you had to be there.

Still, ham sandwich or not facing this hardworking flanker was no picnic. The University of Wisconsin-Whitewater All American picked up rugby after she was cut from her college softball team. She remained a multi-sport athlete, playing four years for the Whitewater women's basketball team. At the same time she moved quickly up the USA ranks, playing for the USA U23s, and earned her first full Eagle cap against Scotland in 2006.

That performance propelled her onto the World Cup team for that year, and she helped the Eagles go 4-1 and finish 5th. She was back for the 2010 WRWC, and finished her career with 26 caps.

A brilliant flanker and excellent rugby mind, Zdanczewicz was a major force behind the excellent Minnesota Valkyries teams and Midwest Thunderbird teams of the 2000s.

Now retired from rugby she remains active in coaching performance and strength & conditioning, working at the University of Miam (Fla.) and currently with the University of Minnesota. She continues to develop athletes with the same dogged determination she brought to her rugby.