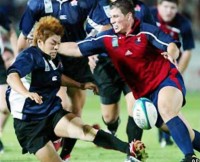 Kirk Khasigian had the unenviable task of replacing one of the USA's all-time greats, as he pulled on into the Eagle #2 jersey after the retirement of Tom Billups.

Roundly considered one of the smartest men ever to step onto a rugby field for the USA, Khasigian was also the first son of an Eagle to make the national team—his father, Fred, started at hooker for the USA in the first modern-era test match against Australia.

An All American as a flanker and then as a hooker at Cal, Khasigian is one of a long list of Cal Eagle hookers, many of whom were converted from other positions. Mobile, fit, hardworking, and skilled, Khasigian played in two Rugby World Cups, and was capped 37 times.

He never really left behind his loose forward roots, and in his best games he seemed to be another flanker on the field in loose play. Thing was, he could do pretty much everything a hooker needed to do and he could accomplish all of that at a very high level.