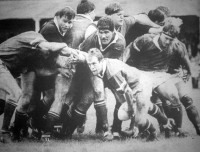 Kevin Swords was a monolith of American Rugby.

At 6-7, 260 he was certainly physically imposing. Having discovered rugby at Holy Cross, Swords became a foundation of the Eagles, playing in 36 test matches from 1985 to 1994 (a record at the time), playing in two Rugby World Cup tournaments, and captaining the Eagles eight times. He missed only three USA games during that time, a testament not only to his dedication but his strength and durability.

He impressed in the 1991 Rugby World Cup, getting special note for his performance against New Zealand, and after the tournament he was invited to play for the Barbarians RFC team.

He played for All-Air Force, Washington RFC, Boston Rugby Club, and Old Blue of New York domestically, and was truly a great of East Coast rugby. He retired in 2000 having led Old Blue to two national DI club finals and two Rugby Super League finals in the 1990s.

"There were no coaches in my time, only a few club officers, so it was the upperclassmen who taught the new players the game. That's what was so special: we were the players and coaches and referees all rolled into one and it made for great camaraderie. We figured the best way to learn the game was to play the game, so we'd just break up whoever showed up to practice into different sides and then scrimmage. That made for a lot confusion at the beginning of the seasons as the players had to unlearn their football habits, and for a lot of frustration as they found out they had to be put 'onsides' rather than just go off and tackle the nearest opponent they saw.

Despite this we had very good teams, and won our far share of games and tournaments. In fact in my senior year we beat Army, always one on the best teams in the East, and won the Loyola Jesuit tournament. To a man, the guys I played with still think of their rugby experience as one of the most important aspects of what made Holy Cross so special and the friendships formed on the rugby team as the ones that have lasted a lifetime."

Part of the USA's long string of accomplished second row forwards, Swords might be the best of the amateur—he's certainly up there.