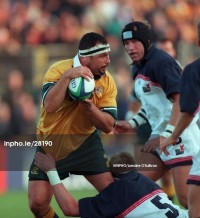 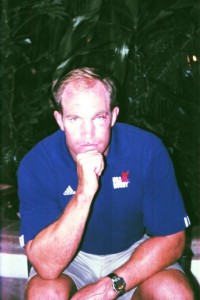 An All American in football and rugby at Occidental, Hodges, like many of the top players from the late 1990s, came to the game late, but embraced it quickly. A cinder block of a man who could play lock, flanker, or No. 8, he was a leader by example, taking on the toughest jobs and the nastiest roles with no complaint, and perhaps even relish.

That’s right, modern Welsh Rugby owes its success, in part, to an American.

Between stints with the Scarlets, Hodges plaed at bridgend in Wales, but it was with Llanelli that he was most associated as a professional. His form for the Scarlets in 2001 was such that his coach was prompted to say that if he were Welsh he would have spent his summer in Australia playing for the British & Irish Lions, and would have been an automatic pick to start.

In 2002 Dave Hodges played 44 professional and international games in one 12-month period. Capped 54 times by the USA, he captained the Eagles more times (28) than any player save Todd Clever.

He was a fan favorite because he gave everything. He was a player favorite for the same reason. He didn’t panic. When, in 2002, the USA was on the verge of failing to qualify for the Rugby World Cup, it was, in part, the steadying influence of Hodges that kept them going and allowed them to crush Spain in the final playoff to make it to the big dance.

There aren’t too many superlatives for this player—from the training ground to the locker room to dry fields of Southern California to the muddy pitches of Wales and the rocking stadia of the international game, he was one of the very best.