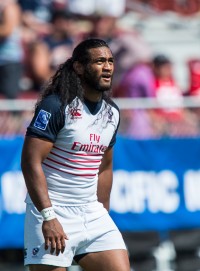 USA center Thretton Palamo has three months to make an impression at Saracens, as he joins the London-based pro club on a three-month trial.

Palamo was a pro prospect over six years ago when he joined Biarritz on a short-term contract as a teenager. He didn't hook on then, and eventually, after enrolling at the University of Utah turned to football. That turned out to be a short deviation, as, upon graduation, Palamo returned to rugby, training at the Olympic Training Center in Chula Vista, and stepping on the field for the 15s Eagles in June.

That, along with an impressive performance ta rugby combine in Minnesota, was enough to interest Saracens, which already has Eagles Chris Wyles Hayden Smith, and Titi Lamositele on their rosters. Palamo provides power and athleticism in the midfield and likely on the wing in an Aviva Premiership where wings need to bust through contact to score.

If he follows the example of the likes of Blaine Scully and Scott LaValla, and shows a big work ethic and ability to learn during his trial, he should hook on for a longer-term contract.

There are now 11 USA players on contract in major pro leagues in Europe (Aviva Premiership, Italian Eccellenza, French Top 14, Celtic RaboDirect12). Of those, six played rugby in college in the USA, and seven players rugby as a high-schooler, with six of them going through the national team age-grades. The only pro player who didn't do one or the other was Chris Wyles.