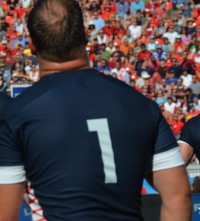 Longtime USA prop Shawn Pittman has announced his retirement from the game of rugby effective immediately.

At just 26 years of age, Pittman has represented the United States on the international rugby stage for the better part of nine years, including the AIG Men’s Junior All-Americans in the 2007 and 2008 IRB Junior World Championships.

It was in 2008 when Pittman made his senior debut for the national team. At Rio Tinto Stadium in Sandy, Utah, Pittman took to the pitch wearing No. 17 in a 43-9 victory. Six years later, he holds 30 caps at the prop position, 23 of the appearances starts.

“Retirement is going to be an interesting adjustment, to be honest,” Pittman said. “I’ve focused a great deal of the last seven years trying to play at the highest level, but I’m happy to be taking a step away from playing only to be stepping into a coaching role with Serevi Rugby.

“I’m happy to be able to give back to rugby at such a young age. I will miss playing, and most of all representing my country in a sport I love so much. Playing for the United States has been a highlight of my career and I think that will be the part I miss so much.”

Pittman played for London Welsh in England for two seasons between 2010 and 2012 and made an appearance in each of the Eagles’ four 2011 IRB Rugby World Cup matches.

His last full match for the Eagles was in August 2013 during the team’s IRB Rugby World Cup 2015 Qualifier series with Canada. Since then he has battled injuries and was in contention for selection to this year’s Summer Series and upcoming Fall Tour.

Pittman began his rugby career with the Chuckanut Bay Rugby Club in Ferndale, Wash. near the Canadian border. It was there that he earned the nickname "Grizzly" as his then-long hair and bushy beard put some in mind of the character Grizzly Adams. Pittman was a Washington Logger select side player at No. 8, and played No. 8 as a USA age-grader before being converted to prop.

“It has been my privilege to have known and coached Shawn over the past six years,” Eagles Head Coach Mike Tolkin said. “He has excelled at all levels of the Eagle system – from the U18s up through the men’s national team – where he played in a World Cup and became one of our best scrummagers and reliable veterans. His agility, aggression, and natural strength made him a formidable player, and his easy-going personality and pride in wearing the Eagle jersey contributed to our strong team culture.

“We are all sad to see Shawn have to leave the Eagles prematurely, but he gave it every shot he could over the past year and, in the end, he made the smart choice. He leaves his playing days on top of his game, and I am sure he will remain an active member in the game of rugby and will remain part of the Eagles’ family. On behalf of the Eagles, I would like to thank Shawn for all he has given for his national team.”

Pittman has been working with Serevi Rugby to help grow the game in the Pacific Northwest and the rest of the country and will continue to do so for the foreseeable future.