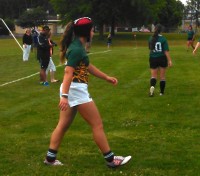 The Southern California girls all-star team capped off a superb weekend, derating Washington 27-10 in the final of the Great Northwest Challenge in Portland, Ore. Sunday.

Washington had been something of a surprise arrival in the final after they came back form a 12-0 deficit to beat Northern California 14-12, kicking the winning conversion with almost no time left.

“We talk more about developing our game. We want to win of course, but sticking to the basics first is what we’re striving for,” said freshman fullback Lilly Durbin, who was a terror on the counter-attack all weekend.

AnnaKaren Pedraza was solid in drawing attention from the defenses, and the forwards recycled quickly.

“It was nice to see the backs moving the ball down the line, working together, cooperating, looping,” said SoCal Coach Marin Pinnell. “And then speed to finish.”

“We were able to absorb pressure in our game against Washington yesterday and that was great,” added Coach Craig Pinnell.

That was the story of the tournament for Southern California, but in the final, the Griffins struggled early in adjusting to the ref calls. As a result, they trailed at halftime.

Taylin Smail and Danielle Anderson ran in tries for Washington, while Southern California answered with a try from Diarr Lillie and a conversion from Kayla Cannett. That made it 10-7 at the break, but the second half was all Southern California.

“What was great was how the girls figured it out for themselves,” said Craig Pinnell. “They didn’t get upset, they worked it out, and started to stretch them.”

Washington had worked awfully hard to get to the final, but the last 20 minutes was perhaps asking a bit too much. Durbin, Isabel Manu, Pedraza, and Durbin once more finished the game off.

In other Varsity Girls action, Northern California defeated Oregon 32-7 for third, and a combined NorCal/Oregon side beat Montana 7-0 for 5th. Montana is relatively new to select side rugby and played hard all weekend.

In the JV bracket, Northern California, which ran into play fatigue problems in the varsity semis, won the JV final 44-5 over Oregon.