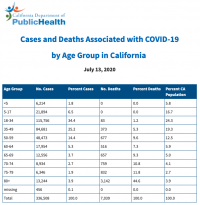 Return to play in the time of COVID-19 for youth and high school rugby promises to be very complicated.

Already we're seeing teams get antsy—nascent attempts at hosting small tournaments are garnering lots of interest from teams that want to play, and then interest from governing bodies putting the kibosh on the whole thing.

But the debate is more linked with how schools and school districts will behave. And that, of course, is linked to how states and their governments see the problem. Chiming in, as always, are teachers unions. If the unions don't want to teach during the pandemic, it's going to be pretty difficult to open schools.

Here is some information to ponder when you think about rugby coming back in the youth and HS level:

1. Yes, it's true that COVID-19 doesn't not affect young people nearly as badly as it does older people. According to the American Council on Science and Health, almost 81% of the COVID deaths in the USA were to people 65 or older. Deaths for people 24 or younger accounted for 0.15% of all COVID deaths in the country.

So it seems pretty clear that COVID-19 is much, much more dangerous to older people than it is to younger people.

2. However ... younger adults appear to be more likely to get COVID-19. This is probably due to the fact that young people are more likely to live and socialize in densely-populated areas. The recent spikes in cases throughout the USA have not coincided with spikes in deaths, because the cases appear to be the result of more socializing and more group gatherings, mostly by young people.

The California Department of Health breaks cases down by age, and more than a third of cases were with people aged 18-34. Combine that group with those aged 35-49 and you have 59.6 of all cases in California, but only 6.5% of the deaths. Kids under 18 account for only 8.3% of cases because their parents can still (generally) tell them what to do.

But it's also been positive that kids just don't get it so easily. This has been stated in countries where schools were not shut down. The percentage of positive COVID cases among children appears to be fairly consistent worldwide, according to published reports from the WHO and CDC.

So what this appears to say is that people who routinely associate in groups or are out in the world are more likely to get COVID, but because they are young, they are not as likely to die from it as people over 70. Actually, 80 is really the cutoff in California—44.6% of all the COVID deaths in California were to people over 80 years old.

3. So if kids go back to school, will they then get COVID, not get seriously ill from it, but give it to their teachers, parents, grandparents, and coaches? Maybe. Studies are inconclusive at the moment, and experts have been reluctant to make a statement on that. A study in New South Wales in Australia indicated that in 15 schools in the state, from March through mid-April there were only 18 cases of COVID out of 735 students and 128 staff. Interestingly, the age breakdown holds here, too. Nine students (1.2%) and nine staff (7.0%) got the coronavirus. So once again younger people were less likely to get it even though they were in the same conditions (and presumably, from what we know about children, less likely to wash their hands).

The report said that none of the staff got COVID from anyone at school. They got it from somewhere else. Two of the kids may have contracted COVID from a classmate.

Other studies in other countries that kept schools open support these findings.

A report from the San Jose Mercury News says something similar: https://www.mercurynews.com/2020/07/10/coronavirus-why-kids-arent-the-germbags-and-grownups-are/

See also this article from Frankfurt, Germany. It's in German, but Google Translate translates the lede as follows:

The prevalence of the corona virus in kindergartens, schools and families has apparently been overestimated. A study by the Medical Faculty of the Technical University of Dresden, for which more than 2,000 schoolchildren and teachers have been tested for antibodies since the reopening of schools in Saxony in the spring, neither provided evidence that the virus spreads particularly quickly in schools, nor does it prove so that it is transmitted particularly often by children. "It is rather the opposite," said study director Reinhard Berner, director of the polyclinic for children and adolescent medicine at the Dresden University Hospital. “Children act more like a brake on the infection. Not every infection that reaches them is passed on. " ...

3b. The Flu. Just for kicks, we looked at flu stats—another highly contagious and potentially lethal disease.

So with the flu, which we know from experience is relatively easy to get from kids, kids aren't especially protected from it, but because they are less likely to be suffering from other problems, can recover and go about their lives, while older, sicker people are much more vulnerable.

COVID is also not like the flu because the flu hits most age groups relatively equally, while statistics indicate that COVID is not prevelant in kids under 18.

4. None of this matters if school administrators think they will be perceived as putting children in danger. In addition, very few medical experts want to be the one to say "hey, don't worry about it; it should be fine," and then be wrong. That's a reputation-killer.

5. Teachers, especially older teachers, might well be the ones who should be nervous.

6. Even if schools are opened; even if some sports get on the field; rugby will need to work hard to get the OK because rugby is a high-touch, close-contact sport.

Fortunately for rugby, other sports can blaze a trail. If some districts play football, it should be easy to track if the kids and, more likely, their coaches get sick. Sports like soccer and cross country and volleyball should all be watched closely. Rugby isn't considered a big-time sport in schools, and that's a good thing, because it's basketball, wrestling, swimming, and hockey that will be worried. They're the winter sports that need to know if the fall sports weathered the fall.

But it will be difficult to study the effects if there are no sports. New Jersey is delaying the start of its fall HS sports season. Arizona, Kentucky, Tennessee, Washington, and West Virginia have all instituted delays. New Mexico moved football and soccer to the spring. Florida, New York, California and other sports are still thinking about it.

Everyone will be watching the states that go ahead as normal. But who is willing to be that state?