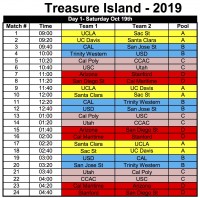 The West Coast 7s has confirmed its pools and schedule for the tournament to be held October 19-20 on Treasure Island in San Francisco.

The event is one of the bigger men's college sevens tournaments of the fall. Last year, Cal won the tournament over UCLA, while Arizona finished 3rd after almost beating Cal in the semis.

This year promises to be a very close one with UCLA already having defeated Cal in the West Coast 7s warmup tournament. Cal Poly also took down Cal in pool play, while Arizona could well be a winner, also.

UCLA, UC Davis, Santa Clara, and Sacramento State are in Pool A

Trinity Western is a new varsity program out of British Columbia. This will be the program's first serious competition.

Click on the image for the Day One schedule